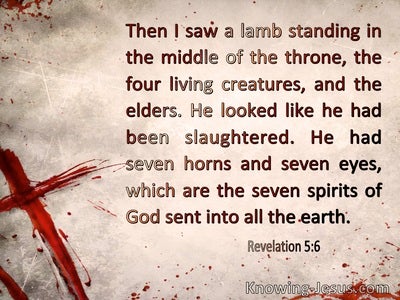 Then Delilah said to Samson, “You have mocked me all along and told me lies! Tell me how you can be tied up.”He told her, “If you weave the seven braids on my head with the web of a loom—” She fastened the braids with a pin and called to him, “Samson, the Philistines are here!” He awoke from his sleep and pulled out the pin, with the loom and the web.

Then she let him fall asleep on her lap and called a man to shave off the seven braids on his head. In this way, she made him helpless, and his strength left him.

Then I saw One like a slaughtered lamb standing between the throne and the four living creatures and among the elders. He had seven horns and seven eyes, which are the seven spirits of God sent into all the earth.

Then another sign appeared in heaven: There was a great fiery red dragon having seven heads and 10 horns, and on his heads were seven diadems.

And I saw a beast coming up out of the sea. He had 10 horns and seven heads. On his horns were 10 diadems, and on his heads were blasphemous names.

So he carried me away in the Spirit to a desert. I saw a woman sitting on a scarlet beast that was covered with blasphemous names and had seven heads and 10 horns.

Then the angel said to me, “Why are you astonished? I will tell you the secret meaning of the woman and of the beast, with the seven heads and the 10 horns, that carries her.

For who scorns the day of small things? These seven eyes of the Lord, which scan throughout the whole earth, will rejoice when they see the plumb line in Zerubbabel’s hand.”