7 Bible Verses about The Perfect Temple 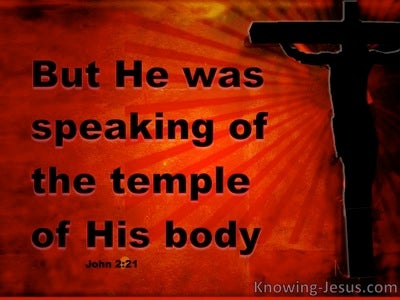 Matthew 26:61
Verse Concepts
Rebuilding The TempleAbolition
Destruction Of The Temple

and stated, "This man said, "I can destroy the sanctuary of God and rebuild it in three days.'"

Mark 14:58
Verse Concepts
Rebuilding The TempleAbolition
Destruction Of The Temple

and saying, "You who were going to destroy the sanctuary and rebuild it in three days save yourself! If you're the Son of God, come down from the cross!"

Acts 15:16
Verse Concepts
The Gospel To The NationsrebuildingCovenant, God's with David
God Living In The TabernacleRepairingDavid, Spiritual Significance Of

""After this, I will come back and set up David's fallen tent again. I will restore its ruined places and set it up again

Then tell him, "This is what the LORD of the Heavenly Armies says: "Here is the man whose name is The Branch. He will branch out from where he is and will rebuild the Temple of the LORD. Yes, he will indeed rebuild the Temple of the LORD, and he will exalt its majesty by sitting and ruling on his throne. He will serve as priest on his throne, and no contention will exist between them.

Those who are now far away will come and do reconstruction work in the Temple of the LORD. Then you will know that the LORD of the Heavenly Armies has sent me to you. This will come about if you diligently obey the voice of the LORD your God."'"