5 Bible Verses about The Spirit Of Truth 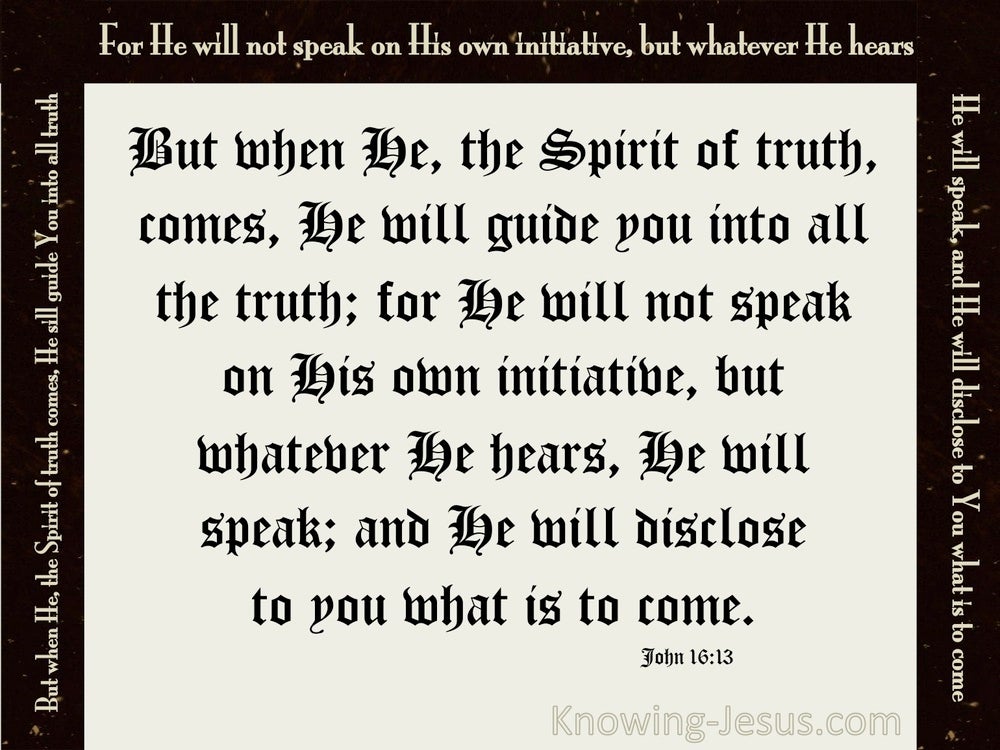 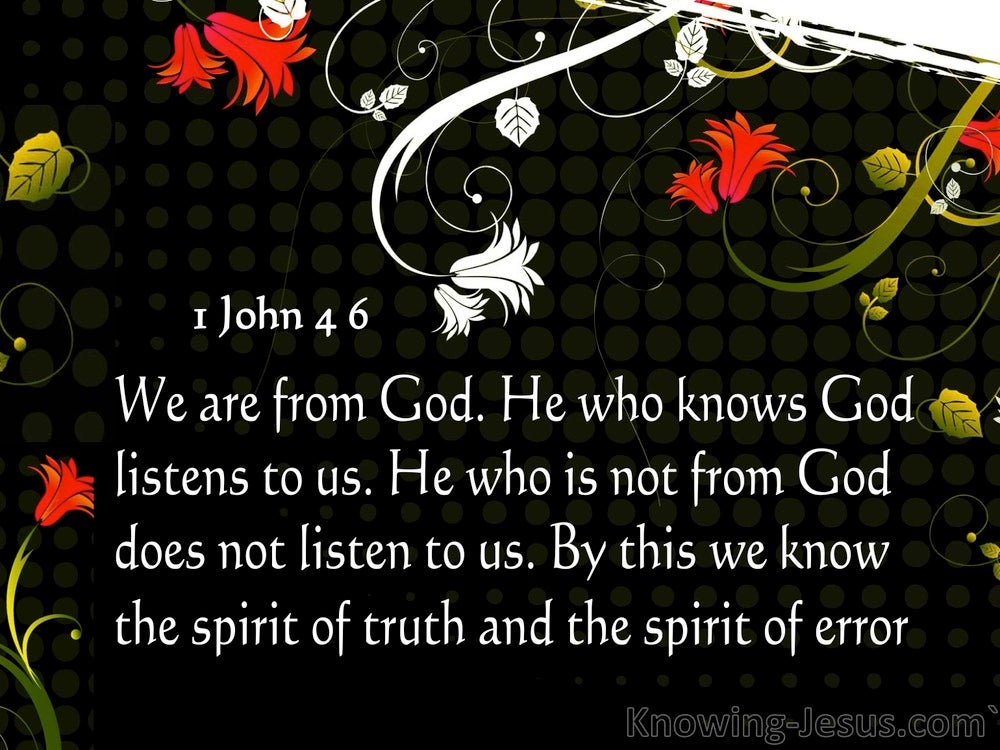 that is the Spirit of truth, whom the world cannot receive, because it does not see Him or know Him, but you know Him because He abides with you and will be in you.

We are from God; he who knows God listens to us; he who is not from God does not listen to us. By this we know the spirit of truth and the spirit of error.

1 John 5:6
Verse Concepts
Symbols of the Holy SpiritThe Blood Of JesustestifyingWater For Baptism
Blood, of Jesus ChristGospel, Transmission OfRevelation, In NtThe Witness Of The Holy Spirit

"I am the true vine, and My Father is the vinedresser. "Every branch in Me that does not bear fruit, He takes away; and every branch that bears fruit, He prunes it so that it may bear more fruit. "You are already clean because of the word which I have spoken to you. read more.
"Abide in Me, and I in you. As the branch cannot bear fruit of itself unless it abides in the vine, so neither can you unless you abide in Me. "I am the vine, you are the branches; he who abides in Me and I in him, he bears much fruit, for apart from Me you can do nothing. "If anyone does not abide in Me, he is thrown away as a branch and dries up; and they gather them, and cast them into the fire and they are burned. "If you abide in Me, and My words abide in you, ask whatever you wish, and it will be done for you. "My Father is glorified by this, that you bear much fruit, and so prove to be My disciples. "Just as the Father has loved Me, I have also loved you; abide in My love. "If you keep My commandments, you will abide in My love; just as I have kept My Father's commandments and abide in His love. "These things I have spoken to you so that My joy may be in you, and that your joy may be made full. "This is My commandment, that you love one another, just as I have loved you. "Greater love has no one than this, that one lay down his life for his friends. "You are My friends if you do what I command you. "No longer do I call you slaves, for the slave does not know what his master is doing; but I have called you friends, for all things that I have heard from My Father I have made known to you. "You did not choose Me but I chose you, and appointed you that you would go and bear fruit, and that your fruit would remain, so that whatever you ask of the Father in My name He may give to you. "This I command you, that you love one another. "If the world hates you, you know that it has hated Me before it hated you. "If you were of the world, the world would love its own; but because you are not of the world, but I chose you out of the world, because of this the world hates you. "Remember the word that I said to you, 'A slave is not greater than his master ' If they persecuted Me, they will also persecute you; if they kept My word, they will keep yours also. "But all these things they will do to you for My name's sake, because they do not know the One who sent Me. "If I had not come and spoken to them, they would not have sin, but now they have no excuse for their sin. "He who hates Me hates My Father also. "If I had not done among them the works which no one else did, they would not have sin; but now they have both seen and hated Me and My Father as well. "But they have done this to fulfill the word that is written in their Law, 'THEY HATED ME WITHOUT A CAUSE.' "When the Helper comes, whom I will send to you from the Father, that is the Spirit of truth who proceeds from the Father, He will testify about Me, and you will testify also, because you have been with Me from the beginning.

"I will ask the Father, and He will give you another Helper, that He may be with you forever; that is the Spirit of truth, whom the world cannot receive, because it does not see Him or know Him, but you know Him because He abides with you and will be in you. "I will not leave you as orphans; I will come to you. read more.
"After a little while the world will no longer see Me, but you will see Me; because I live, you will live also.

"But now I am going to Him who sent Me; and none of you asks Me, 'Where are You going?' "But because I have said these things to you, sorrow has filled your heart. "But I tell you the truth, it is to your advantage that I go away; for if I do not go away, the Helper will not come to you; but if I go, I will send Him to you. read more.
"And He, when He comes, will convict the world concerning sin and righteousness and judgment; concerning sin, because they do not believe in Me; and concerning righteousness, because I go to the Father and you no longer see Me; and concerning judgment, because the ruler of this world has been judged. "I have many more things to say to you, but you cannot bear them now. "But when He, the Spirit of truth, comes, He will guide you into all the truth; for He will not speak on His own initiative, but whatever He hears, He will speak; and He will disclose to you what is to come.