Fear of man causeth a snare, And the confident in Jehovah is set on high.

The fear of man bringeth a snare: but whoso putteth his trust in the LORD shall be safe.

Fearing any human being is a trap, but confiding in the LORD keeps anyone safe.

The fear of man brings a snare, but he who puts his trust in LORD shall be safe.

The fear of man bringeth a snare; But whoso putteth his trust in Jehovah shall be safe.

The fear of man brings a snare, but whoever leans on, trusts in, and puts his confidence in the Lord is safe and set on high.

The fear of man is a cause of danger: but whoever puts his faith in the Lord will have a safe place on high.

The fear of man bringeth a snare; but whoso putteth his confidence in Jehovah is protected.

The fear of man will give a snare: and he trusting in Jehovah shall be exalted.

The fear of man brings a snare: but whosoever puts his trust in the LORD shall be safe.

The fear of a person will lay a snare, but he who trusts in Yahweh will be secure.

The fear of man brings a snare, but whoever puts his trust in Jehovah shall be safe.

He that feareth men, shall have a fall; but whoso putteth his trust in the LORD shall come to honour.

The fear of people becomes a snare, but whoever trusts in the Lord will be set on high.

The fear of man, setteth a snare, but, he that trusteth in Yahweh, shall be placed on high.

The fear of man bringeth a snare: but he who putteth his trust in the LORD shall be safe.

The fear of man proves to be a snare, but whoever puts his trust in Yahweh is kept safe. 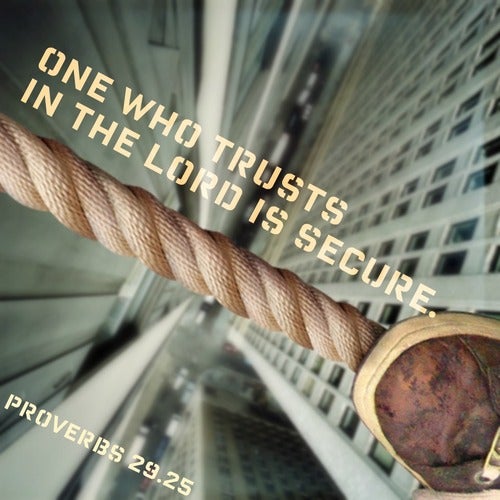 Fear » The fear of man

Safety » Who shall be safe

Snares » What brings a snare

Trust » Leads to » Safety in times of danger

The Effects Of Faith

Trusting God And Not Worrying

Word Count of 20 Translations in Proverbs 29:25 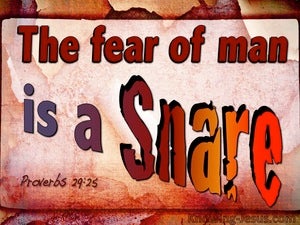 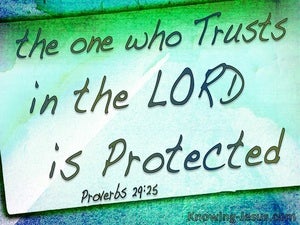 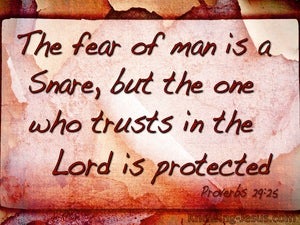 Prayer To Keep Me From Fear When Times Are Hard
A prayer for Proverbs 29:25

24 Whoso is sharing with a thief is hating his own soul, Execration he heareth, and telleth not. 25 Fear of man causeth a snare, And the confident in Jehovah is set on high. 26 Many are seeking the face of a ruler, And from Jehovah is the judgment of each.

Other Readings
More Proverbs Of Solomon

'And I say to you, my friends, be not afraid of those killing the body, and after these things are not having anything over to do;

and Abraham saith concerning Sarah his wife, 'She is my sister;' and Abimelech king of Gerar sendeth and taketh Sarah.

and men of the place ask him of his wife, and he saith, 'She is my sister:' for he hath been afraid to say, 'My wife -- lest the men of the place kill me for Rebekah, for she is of good appearance.'

Because in Me he hath delighted, I also deliver him -- I set him on high, Because he hath known My name.

Better to take refuge in Jehovah than to trust in man,

The wise in any matter findeth good, And whoso is trusting in Jehovah, O his happiness.

A tower of strength is the name of Jehovah, Into it the righteous runneth, and is set on high.

and it cometh to pass as he hath drawn near to enter Egypt, that he saith unto Sarai his wife, 'Lo, I pray thee, I have known that thou art a woman of beautiful appearance;

And Abraham saith, 'Because I said, 'Surely the fear of God is not in this place, and they have slain me for the sake of my wife;

and Aaron saith, 'Let not the anger of my lord burn; thou -- thou hast known the people that it is in evil;

And Saul saith unto Samuel, 'I have sinned, for I passed over the command of Jehovah, and thy words; because I have feared the people, I also hearken to their voice;

And David saith unto his heart, 'Now am I consumed one day by the hand of Saul; there is nothing for me better than that I diligently escape unto the land of the Philistines, and Saul hath been despairing of me -- of seeking me any more in all the border of Israel, and I have escaped out of his hand.'

Neither man nor woman doth David keep alive, to bring in word to Gath, saying, 'Lest they declare it against us, saying, Thus hath David done, and thus is his custom all the days that he hath dwelt in the fields of the Philistines.'

And he feareth, and riseth, and goeth for his life, and cometh in to Beer-Sheba, that is Judah's, and leaveth his young man there,

and they are helped against them, and the Hagarites are given into their hand, and all who are with them, for they cried to God in battle, and He was entreated of them, because they trusted in Him.

And I am afflicted and pained, Thy salvation, O God, doth set me on high.

A Song of the Ascents. Those trusting in Jehovah are as Mount Zion, It is not moved -- to the age it abideth.

Whoso is proud in soul stirreth up contention, And whoso is trusting on Jehovah is made fat.

Every saying of God is tried, A shield He is to those trusting in Him.

It is good that thou dost lay hold on this, and also, from that withdrawest not thy hand, for whoso is fearing God goeth out with them all.

And of whom hast thou been afraid, and fearest, That thou liest, and Me hast not remembered? Thou hast not laid it to thy heart, Am not I silent, even from of old? And Me thou fearest not?

Nebuchadnezzar hath answered and hath said, 'Blessed is the God of Shadrach, Meshach, and Abed-Nego, who hath sent His messenger, and hath delivered His servants who trusted on Him, and the word of the king changed, and gave up their bodies that they might not serve nor do obeisance to any god except to their own God.

'And be not afraid of those killing the body, and are not able to kill the soul, but fear rather Him who is able both soul and body to destroy in gehenna.

Then his disciples having come near, said to him, 'Hast thou known that the Pharisees, having heard the word, were stumbled?'

And Peter without was sitting in the court, and there came near to him a certain maid, saying, 'And thou wast with Jesus of Galilee!'

this one came unto him by night, and said to him, 'Rabbi, we have known that from God thou hast come -- a teacher, for no one these signs is able to do that thou dost, if God may not be with him.'

These things said his parents, because they were afraid of the Jews, for already had the Jews agreed together, that if any one may confess him -- Christ, he may be put out of the synagogue;

Still, however, also out of the rulers did many believe in him, but because of the Pharisees they were not confessing, that they might not be put out of the synagogue,

From this time was Pilate seeking to release him, and the Jews were crying out, saying, 'If this one thou mayest release, thou art not a friend of Caesar; every one making himself a king, doth speak against Caesar.'

And when Peter came to Antioch, to the face I stood up against him, because he was blameworthy,

in my first defence no one stood with me, but all forsook me, (may it not be reckoned to them!)

who through him do believe in God, who did raise out of the dead, and glory to him did give, so that your faith and hope may be in God.