Be at peace in the knowledge that I am God: I will be lifted up among the nations, I will be honoured through all the earth. 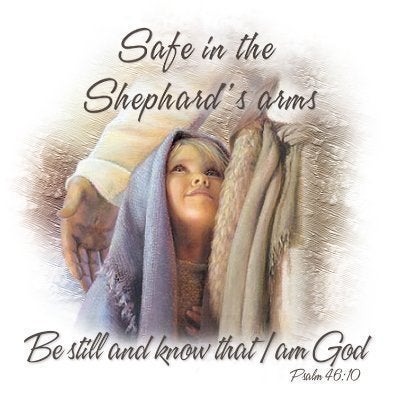 the Earth » God » Shall be exalted in

Exaltation » The lord being exalted

the Heathen » God » Will be exalted among

Resignation » Motives to » God, greatness of

Assurance in the life of faith

You Will Know I Am The Lord

The Lord [Yahweh] Is God

Be Still My Soul

The Discipline Of Spiritual Tenacity 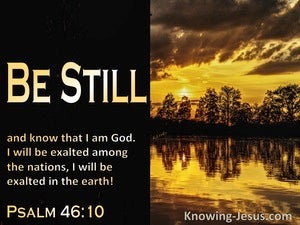 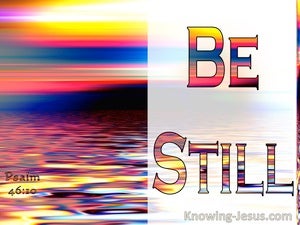 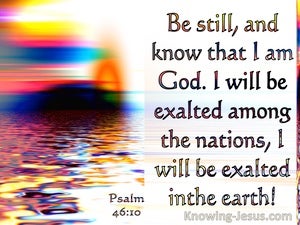 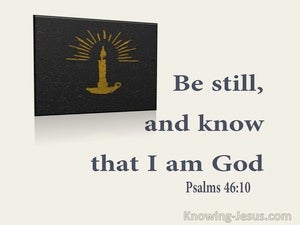 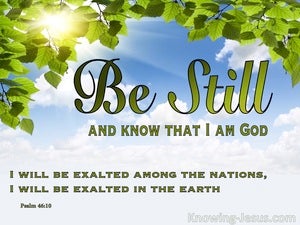 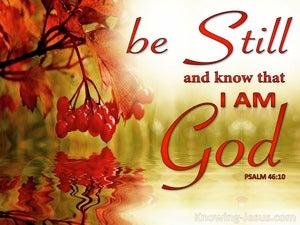 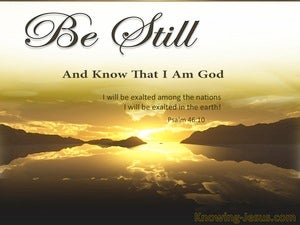 9 He causes wars to cease all over the earth, he causes the bow to break, the spear to snap, the chariots to ignite and burn. 10 Be in awe and know that I am God. I will be exalted among the nations. I will be exalted throughout the earth. 11 The LORD of the heavenly armies is with us; the God of Jacob is our refuge. Interlude To the Director: A song by the Sons of Korah.

Acknowledge that the LORD is God. He made us and we belong to him; we are his people and the sheep of his pasture.

The haughty looks of mankind will be brought low, the lofty pride of human beings will be humbled, and the LORD alone will be exalted at that time.

Rise up, LORD, because you are strong; we will sing and praise your power. To the Director: To the tune of "Doe of the Dawn".A Davidic Psalm.

"Humanity's haughtiness will be humbled, male arrogance will be brought low, and the LORD alone will be exalted in that day.

Be silent, every living thing, in the presence of the LORD, because he is emerging from his Holy Place."

Be exalted above the heavens, God! May your glory cover the earth!

Then they will know that you alone whose name is LORD are the Most High over all the earth. To the Director: On the Gittith. A Psalm by the descendants of Korah.

"The LORD is in his holy Temple. All the earth be quiet in his presence."

Now I know that the LORD is greater than all other gods, because of what happened to the Egyptians when they acted arrogantly against Israel."

As the time for the evening offering arrived, Elijah the prophet approached and said, "LORD God of Abraham, Isaac, and Israel, let it be known today that you are God in Israel and that I, your servant, have done all of this in obedience to your word.

Did the gods of those nations whom my ancestors destroyed deliver them, including Gozan, Haran, Rezeph, and Eden's descendants in Telassar?

To you, LORD, belongs the greatness, and the valor, and the splendor, and the endurance, and the majesty because all that is in heaven and on earth is yours. To you belongs the kingdom, LORD, and you are exalted as head over all.

But the LORD of the Heavenly Armies is exalted in justice, and the Holy God proves himself to be righteously holy.

They sang the song of God's servant Moses and the song of the lamb: "Your deeds are both spectacular and amazing, Lord God Almighty. Your ways are just and true, King of the nations.

This very day the LORD will deliver you into my hand, and I'll strike you down and remove your head from you. And this very day I'll give the dead bodies of the Philistine army to the birds of the sky and to the animals of the earth, so that all the earth will know that there is a God in Israel,

I will exalt myself and demonstrate my holiness, making myself known to many people, who will learn that I am the LORD.'"