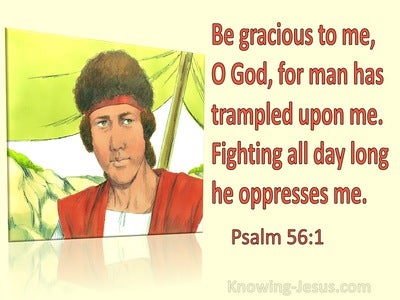 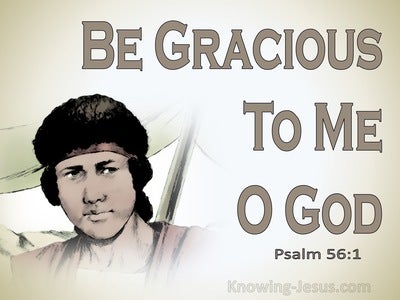 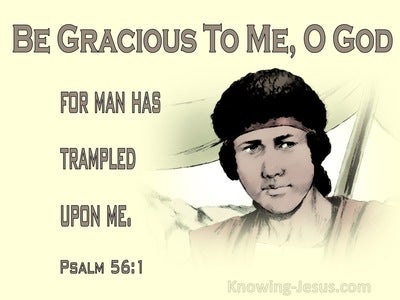 Be merciful unto me, O God; for man would swallow me up: All the day long he fighting oppresseth me.

For the choir director; according to

{To the chief Musician upon Jonathelemrechokim, Michtam of David, when the Philistines took him in Gath.} Be merciful unto me, O God: for man would swallow me up; he fighting daily oppresseth me.

For the choir director: according to “A Silent Dove Far Away.”

Have mercy on me, God, because men have harassed me. Those who oppress me have fought against me all day long.

Be merciful to me, O God, for man would swallow me up. Fighting all the day long he oppresses me.

All day long the adversary oppresses and torments me.

Have mercy on me, O God, for man is attempting my destruction; every day he makes cruel attacks against me.

{To the chief Musician. On Jonathelem-rechokim. Of David. Michtam; when the Philistines took him in Gath.} Be gracious unto me, O God; for man would swallow me up: all the day long fighting he oppresseth me.

To the overseer for the silent dove of those far off: to David, a poem in the rovers taking him in Gath. Compassionate me, O God, for man panted after me; warring all the day, he will press me.

[To the Chief Musician upon jonathelemrechokim. A michtam of David, when the Philistines took him to Gath.] Be merciful unto me, O God: for man would swallow me up; he fighting daily oppresses me.

Be gracious to me, O God, because humankind has trampled me; fighting all the day he oppresses me.

To the Chief Musician. Concerning the silent dove, those far off. Of David, a secret treasure, when the Philistines took him in Gath. Be merciful to me, O God, for man would swallow me up; fighting daily, he presses me down.

{To the chanter, upon the domme stock dove, which flyeth far off: Michtam of David, when the Philistines took him in Gath} Be merciful unto me, O God, for men will tread me down: they are daily fighting and troubling me.

For the music director; according to the yonath-elem-rechovim style; a prayer of David, written when the Philistines captured him in Gath. Have mercy on me, O God, for men are attacking me! All day long hostile enemies are tormenting me.

Be merciful to me, God, for man wants to swallow me up. All day long, he attacks and oppresses me.

Show me favour, O God, For weak man hath panted for me, All the day, a fighter oppresseth me:

To the chief Musician upon Jonathelem-rechokim, Michtam of David, when the Philistines took him in Gath. Be merciful to me, O God: for man would swallow me up; he fighting daily oppresseth me.

Be merciful to me, God, for man wants to swallow me up. All day long, he attacks and oppresses me.

To the Overseer. -- 'On the Dumb Dove far off.' -- A secret treasure of David, in the Philistines' taking hold of him in Gath. Favour me, O God, for man swallowed me up, All the day fighting he oppresseth me,

Music » Micahtam » A musical term in the titles of 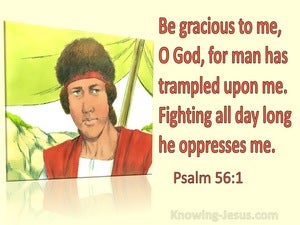 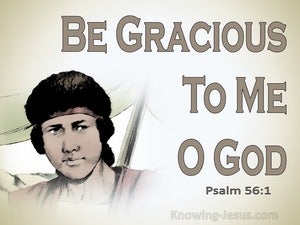 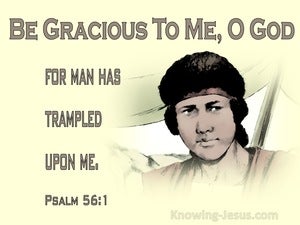 A Call For God's Protection

Other Readings
Betrayal By A Friend

Preserve me, O God; for in thee do I take refuge.

When evil-doers came upon me to eat up my flesh, Even mine adversaries and my foes, they stumbled and fell.

But as for me, my prayer is unto thee, O Jehovah, in an acceptable time: O God, in the abundance of thy lovingkindness, Answer me in the truth of thy salvation.

And the servants of Achish said unto him, Is not this David the king of the land? did they not sing one to another of him in dances, saying, Saul hath slain his thousands, And David his ten thousands?

But he princes of the Philistines were wroth with him; and the princes of the Philistines said unto him, Make the man return, that he may go back to his place where thou hast appointed him, and let him not go down with us to battle, lest in the battle he become an adversary to us: for wherewith should this fellow reconcile himself unto his lord? should it not be with the heads of these men?

Thou wilt make them as a fiery furnace in the time of thine anger: Jehovah will swallow them up in his wrath, And the fire shall devour them.

Have mercy upon me, O Jehovah, for I am in distress: Mine eye wasteth away with grief, yea , my soul and my body.

Deliver me from mine enemies, O my God: Set me on high from them that rise up against me.

My God with his lovingkindness will meet me: God will let me see my desire upon mine enemies.

O God thou hast cast us off, thou hast broken us down; Thou hast been angry; oh restore us again.

The earth opened and swallowed up Dathan, And covered the company of Abiram.

Then they had swallowed us up alive, When their wrath was kindled against us;

To him that smote Egypt in their first-born; For his lovingkindness endureth for ever;

But overthrew Pharaoh and his host in the Red Sea; For his lovingkindness endureth for ever:

To him that smote great kings; For his lovingkindness endureth for ever;

And in thy lovingkindness cut off mine enemies, And destroy all them that afflict my soul; For I am thy servant.

Let us swallow them up alive as Sheol, And whole, as those that go down into the pit;

The Lord hath swallowed up all the habitations of Jacob, and hath not pitied: He hath thrown down in his wrath the strongholds of the daughter of Judah; He hath brought them down to the ground; he hath profaned the kingdom and the princes thereof.

All thine enemies have opened their mouth wide against thee; They hiss and gnash the teeth; they say, We have swallowed her up; Certainly this is the day that we looked for; we have found, we have seen it.

Israel is swallowed up: now are they among the nations as a vessel wherein none delighteth.