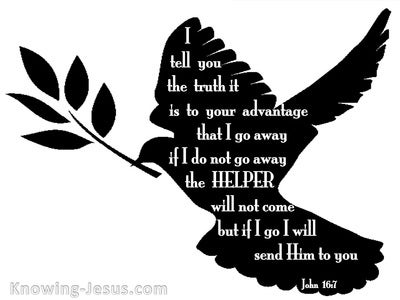 Deuteronomy 24:14
Verse Concepts
Not Helping The PoorAliensEmployersThe NeedyMasters Duties Towards Servants
Abuse Of Authority, Warnings AgainstForeigners Included In The LawMastersUnkindness

Don't take advantage of a hired person who is poor and needy, whether he's your fellow citizen or a foreigner who lives in your city.

For what advantage has the wise person over the fool? What advantage does the poor man have in knowing how to face life?

What advantage, then, does the Jew have, or what value is there in circumcision?

For what happens to people also happens to animals a single event happens to them: just as someone dies, so does the other. In fact, they all breathe the same way, so that a human being has no superiority over an animal. All of this is pointless.

However, I'm telling you the truth. It's for your advantage that I'm going away, because if I don't go away, the Helper won't come to you. But if I go, I will send him to you.

Romans 3:9
Verse Concepts
All Have SinnedFar Be It!
The Gospel To Jew And GentileForgiveness, Divine

What, then, does this mean? Are we Jews any better off? Not at all! For we have already accused everyone, both Jews and Greeks, of being under the power of sin.

At the end of ten days their appearance was better and their faces were well-nourished compared to the young men who ate the king's rich food.

Cross over to Calneh and look around, then go on to that great city of Hamath, and from there go down to Gath of the Philistines. Are you better than these kingdoms? Or is their territory more extensive than yours?

Therefore, LORD, please kill me, because it's better for me to die than to live!"

When the sun rose, God prepared a harsh east wind. The sun beat down on Jonah's head, he became faint, and he begged to die. "It is better for me to die than to live!" he said.

because the Almighty has done great things for me. His name is holy.

Prayer » Of the righteous » Advantages

Prayer » Of the righteous » Advantages

Therefore, make it your habit to confess your sins to one another and to pray for one another, so that you may be healed. The prayer of a righteous person is powerful and effective.