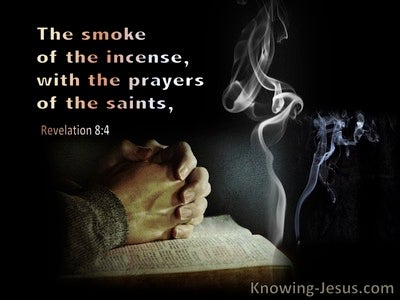 Then there were voices and thunders and lightnings; and there was a great earthquake, such as has never been since men were upon the earth, so mighty an earthquake, and so great.

And the fifth angel poured out his vial upon the throne of the beast; and its kingdom was filled with darkness; and they gnawed their tongues for pain,

And the great city was divided into three parts, and the cities of the Gentiles fell; and Babylon the great came in remembrance before God, to give unto her the cup of the wine of the fierceness of his wrath.

And the first went and poured out his vial upon the earth; and an evil and grievous sore fell upon the men who had the mark of the beast and upon those who worshipped its image.

And the fourth angel poured out his vial against the sun; and it was given unto it to scorch men with fire. And men were scorched with great heat, and blasphemed the name of God, who has authority over these plagues; and they did not repent to give him glory.

And the sixth angel poured out his vial into the great river Euphrates; and its water was dried up, that the way of the kings from the rising of the sun might be prepared.

And when ye shall hear of wars and rumours of wars, be ye not troubled, for such things must needs be; but the end shall not be yet. For people shall rise against people and kingdom against kingdom, and there shall be earthquakes in each place, and there shall be famines and troubles: these shall be the beginnings of sorrows. But take heed to yourselves, for they shall deliver you up in the councils, and in the synagogues ye shall be beaten; and ye shall be called before rulers and kings for my sake for a testimony unto them.

I form the light and create darkness; I make peace and create evil: I am the LORD that does all this.

O thou afflicted, tossed with tempest, and not comforted, behold, I will cement thy stones upon carbuncle and lay thy foundations upon sapphires.

For nation shall rise against nation and kingdom against kingdom, and there shall be famines and pestilences and earthquakes in different places.

Ye look for much and find little; and when ye lock it up at home, I shall blow upon it. Why? said the LORD of the hosts. Because my house is deserted, and ye run each one of you unto his own house.

Those that see thee shall narrowly look upon thee, and consider thee, saying, Is this the man that made the earth to tremble; that shook the kingdoms; that made the world as a wilderness and destroyed the cities thereof; that did not open the prison to his prisoners?

For thus hath the LORD of the hosts said: Yet even once, and I will shake the heavens and the earth and the sea and the dry land;

Then they shall know that I am the LORD, when I have made the land into solitude and desert because of all their abominations which they have committed.

And the hail, when it shall come down, shall be in the forest; and the city shall be completely laid low. Blessed are ye that sow upon all waters, ye that plow with the ox and with the ass.

Cheth Jerusalem has grievously sinned; therefore she is removed; all that honoured her despise her because they have seen her nakedness; yea, she sighs and is turned backward.