55 Bible Verses about Poverty, Causes Of 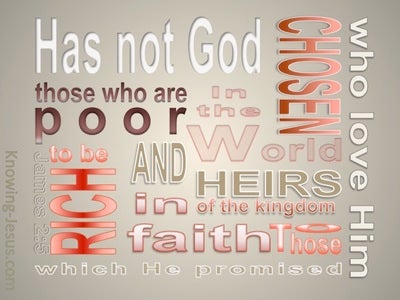 Then to Adam He said, “Because you have listened to the voice of your wife, and have eaten from the tree about which I commanded you, saying, ‘You shall not eat from it’;
Cursed is the ground because of you;
In toil you will eat of it
All the days of your life.
“Both thorns and thistles it shall grow for you;
And you will eat the plants of the field;
By the sweat of your face
You will eat bread,
Till you return to the ground,
Because from it you were taken;
For you are dust,
And to dust you shall return.”

Out of the ground the Lord God caused to grow every tree that is pleasing to the sight and good for food; the tree of life also in the midst of the garden, and the tree of the knowledge of good and evil. Now a river flowed out of Eden to water the garden; and from there it divided and became four rivers. The name of the first is Pishon; it flows around the whole land of Havilah, where there is gold.read more.
The gold of that land is good; the bdellium and the onyx stone are there. The name of the second river is Gihon; it flows around the whole land of Cush. The name of the third river is Tigris; it flows east of Assyria. And the fourth river is the Euphrates.

“Because you did not serve the Lord your God with joy and a glad heart, for the abundance of all things; therefore you shall serve your enemies whom the Lord will send against you, in hunger, in thirst, in nakedness, and in the lack of all things; and He will put an iron yoke on your neck until He has destroyed you.

“A little sleep, a little slumber,
A little folding of the hands to rest”—
Your poverty will come in like a vagabond
And your need like an armed man.

Do not love sleep, or you will become poor;
Open your eyes, and you will be satisfied with food.

“A little sleep, a little slumber,
A little folding of the hands to rest,”
Then your poverty will come as a robber
And your want like an armed man.

He who tills his land will have plenty of food,
But he who follows empty pursuits will have poverty in plenty.

Poverty and shame will come to him who neglects discipline,
But he who regards reproof will be honored.

The plans of the diligent lead surely to advantage,
But everyone who is hasty comes surely to poverty.

So Israel was brought very low because of Midian, and the sons of Israel cried to the Lord.

“For he has oppressed and forsaken the poor;
He has seized a house which he has not built.

Proverbs 13:23
Verse Concepts
AgricultureInjustice
Plenty For The PoorFeeding The Poor

Abundant food is in the fallow ground of the poor,
But it is swept away by injustice.

Your land is desolate,
Your cities are burned with fire,
Your fields—strangers are devouring them in your presence;
It is desolation, as overthrown by strangers.

There I will also provide for you, for there are still five years of famine to come, and you and your household and all that you have would be impoverished.”’

So Joseph bought all the land of Egypt for Pharaoh, for every Egyptian sold his field, because the famine was severe upon them. Thus the land became Pharaoh’s. As for the people, he removed them to the cities from one end of Egypt’s border to the other.

For the Lord your God is bringing you into a good land, a land of brooks of water, of fountains and springs, flowing forth in valleys and hills; a land of wheat and barley, of vines and fig trees and pomegranates, a land of olive oil and honey; a land where you will eat food without scarcity, in which you will not lack anything; a land whose stones are iron, and out of whose hills you can dig copper.

O fear the Lord, you His saints;
For to those who fear Him there is no want.
The young lions do lack and suffer hunger;
But they who seek the Lord shall not be in want of any good thing.

Now a certain woman of the wives of the sons of the prophets cried out to Elisha, “Your servant my husband is dead, and you know that your servant feared the Lord; and the creditor has come to take my two children to be his slaves.”

And a poor man named Lazarus was laid at his gate, covered with sores,

The rich man’s wealth is his fortress,
The ruin of the poor is their poverty.

The manager said to himself, ‘What shall I do, since my master is taking the management away from me? I am not strong enough to dig; I am ashamed to beg.

Let him drink and forget his poverty
And remember his trouble no more.

Men do not despise a thief if he steals
To satisfy himself when he is hungry;

Keep deception and lies far from me,
Give me neither poverty nor riches;
Feed me with the food that is my portion,
That I not be full and deny You and say, “Who is the Lord?”
Or that I not be in want and steal,
And profane the name of my God.

It is good for me that I was afflicted,
That I may learn Your statutes.

Mark 12:44
Verse Concepts
Giving Money To The ChurchGivingThe poor
Blessings Of The PoorSurplus

for they all put in out of their surplus, but she, out of her poverty, put in all she owned, all she had to live on.”

for they all out of their surplus put into the offering; but she out of her poverty put in all that she had to live on.”

Listen, my beloved brethren: did not God choose the poor of this world to be rich in faith and heirs of the kingdom which He promised to those who love Him?

Jesus said to him, “If you wish to be complete, go and sell your possessions and give to the poor, and you will have treasure in heaven; and come, follow Me.” But when the young man heard this statement, he went away grieving; for he was one who owned much property.

For you showed sympathy to the prisoners and accepted joyfully the seizure of your property, knowing that you have for yourselves a better possession and a lasting one.

as sorrowful yet always rejoicing, as poor yet making many rich, as having nothing yet possessing all things.