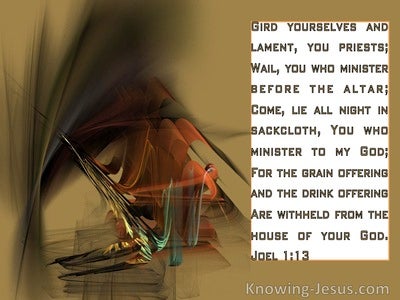 She makes for herself carpets of tapestry. Her clothing is fine linen and purple.

"Speak to the children of Israel, and tell them that they should make themselves fringes in the borders of their garments throughout their generations, and that they put on the fringe of each border a cord of blue:

Samson said to them, "Let me now put forth a riddle to you. If you can explain it to me within the seven days of the feast, and figure it out, then I will give you thirty linen garments and thirty changes of clothing.

You daughters of Israel, weep over Saul, who clothed you in scarlet delicately, who put ornaments of gold on your clothing.

David was clothed with a robe of fine linen, and all the Levites who bore the ark, and the singers, and Chenaniah the master of the song with the singers: and David had on him an ephod of linen.

She shall be led to the king in embroidered work. The virgins, her companions who follow her, shall be brought to you.

I clothed you also with embroidered work, and shod you with sealskin, and I dressed you about with fine linen, and covered you with silk.

And no one puts a piece of unshrunk cloth on an old garment; for the patch would tear away from the garment, and a worse hole is made.

Then the soldiers, when they had crucified Jesus, took his garments and made four parts, to every soldier a part; and also the coat. Now the coat was without seam, woven from the top throughout.

Peter got up and went with them. When he had come, they brought him into the upper chamber. All the widows stood by him weeping, and showing the coats and garments which Dorcas had made while she was with them.

The priest said, "The sword of Goliath the Philistine, whom you killed in the valley of Elah, behold, it is here wrapped in a cloth behind the ephod. If you will take that, take it; for there is no other except that here." David said, "There is none like that. Give it to me."

The woman took and spread the covering over the well's mouth, and spread out bruised grain on it; and nothing was known.

I have spread my couch with carpets of tapestry, with striped cloths of the yarn of Egypt.

"They shall make the ephod of gold, of blue, and purple, scarlet, and fine twined linen, the work of the skillful workman.

The skillfully woven band, which is on it, that is on him, shall be like its work and of the same piece; of gold, of blue, and purple, and scarlet, and fine twined linen.

the finely worked garments, for ministering in the holy place, the holy garments for Aaron the priest, and the garments of his sons, to minister in the priest's office.'"

Of the blue, purple, and scarlet, they made finely worked garments, for ministering in the holy place, and made the holy garments for Aaron; as the LORD commanded Moses.

All the wise-hearted men among those who did the work made the tabernacle with ten curtains; of fine twined linen, blue, purple, and scarlet, with cherubim, the work of the skillful workman, they made them.

He made the veil of blue, and purple, and crimson, and fine linen, and ornamented it with cherubim.

Genesis 37:34
Verse Concepts
Action For A Long TimeClothing, Tearing OfThose Who Tore ClothesBereavement, Expression Of
LossSackcloth And AshesTearing Of Clothes

Jacob tore his clothes, and put sackcloth on his waist, and mourned for his son many days.

David said to Joab, and to all the people who were with him, Tear your clothes, and clothe yourselves with sackcloth, and mourn before Abner. King David followed the bier.

It happened, when Ahab heard those words, that he tore his clothes, and put sackcloth on his flesh, and fasted, and lay in sackcloth, and went softly.

It happened, when king Hezekiah heard it, that he tore his clothes, and covered himself with sackcloth, and went into the house of the LORD.

Now in the twenty-fourth day of this month the children of Israel were assembled with fasting, and with sackcloth, and earth on them.

But as for me, when they were sick, my clothing was sackcloth. I afflicted my soul with fasting; and my prayer returned into my own bosom.

For this clothe yourself with sackcloth, lament and wail; for the fierce anger of the LORD hasn't turned back from us.

Joseph took the body, and wrapped it in a clean linen cloth,

He took it down, and wrapped it in a linen cloth, and placed him in a tomb that was cut in stone, where no one had ever been placed.

The man who had died came out, bound hand and foot with wrappings, and his face was wrapped around with a cloth. Jesus said to them, "Free him, and let him go."

and the cloth that had been on his head, not lying with the linen cloths, but rolled up in a place by itself.

As for your birth, in the day you were born your navel was not cut, neither were you washed in water to cleanse you; you weren't salted at all, nor swaddled at all.

She brought forth her firstborn son, and she wrapped him in bands of cloth, and placed him in a feeding trough, because there was no room for them in the inn.

"You shall make the robe of the ephod all of blue.

They shall take away the ashes from the altar, and spread a purple cloth on it.

Let your garments be always white, and do not let your head lack oil.