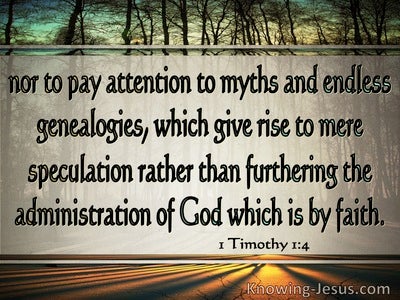 nor to pay attention to myths and endless genealogies, which give rise to mere speculation rather than furthering the administration of God which is by faith.

In pointing out these things to the brethren, you will be a good servant of Christ Jesus, constantly nourished on the words of the faith and of the sound doctrine which you have been following. But have nothing to do with worldly fables fit only for old women. On the other hand, discipline yourself for the purpose of godliness;

For we did not follow cleverly devised tales when we made known to you the power and coming of our Lord Jesus Christ, but we were eyewitnesses of His majesty.

Fables » Not giving heed to fables

As I urged you upon my departure for Macedonia, remain on at Ephesus so that you may instruct certain men not to teach strange doctrines, nor to pay attention to myths and endless genealogies, which give rise to mere speculation rather than furthering the administration of God which is by faith.

For there are many rebellious men, empty talkers and deceivers, especially those of the circumcision, who must be silenced because they are upsetting whole families, teaching things they should not teach for the sake of sordid gain. One of themselves, a prophet of their own, said, "Cretans are always liars, evil beasts, lazy gluttons." read more.
This testimony is true. For this reason reprove them severely so that they may be sound in the faith, not paying attention to Jewish myths and commandments of men who turn away from the truth.

Fables » Some being turned to fables

preach the word; be ready in season and out of season; reprove, rebuke, exhort, with great patience and instruction. For the time will come when they will not endure sound doctrine; but wanting to have their ears tickled, they will accumulate for themselves teachers in accordance to their own desires, and will turn away their ears from the truth and will turn aside to myths.