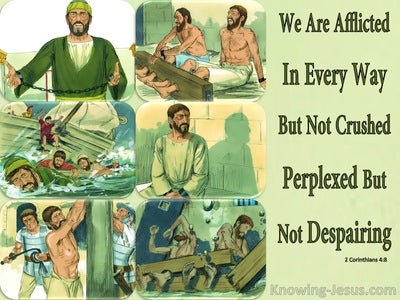 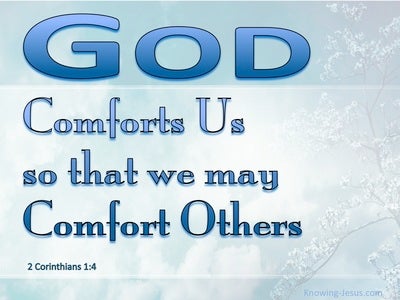 Towards the four winds were the porters, toward the east, west, north, and Negev.

We are troubled on every side, yet not distressed; we are unsure of our lives, but not in despair;

who comforts us in all our tribulation, that we may be able to comfort those who are in any trouble with the comfort with which we ourselves are comforted by God.

He measured it by the four sides: it had a wall round about, five hundred reeds long, and five hundred broad, to make a separation between the sanctuary and the profane place.

and, behold, there came a great wind from the wilderness and smote the four corners of the house, and it fell upon the young men, and they are dead; and I alone have escaped to tell thee.

and thou son of man, thus hath the Lord GOD said unto the land of Israel: The end, the end comes upon the four corners of the land.

And he shall raise up a banner, as an example for the Gentiles and shall assemble the outcasts of Israel and gather together the dispersed of Judah from the four corners of the earth.

and shall go out to deceive the Gentiles which are upon the four corners of the earth, Gog and Magog, to gather them together to battle; the number of whom is as the sand of the sea.

Thou shalt make thee fringes upon the four quarters of thy covering with which thou dost cover thyself.

In the four corners of the court there were patios joined of forty cubits long and thirty broad; these four corners were of one measure.

and saw the heaven opened and a certain vessel descending unto him, as it had been a great sheet knit at the four corners and let down to the earth,

I was in the city of Joppa praying, and in a rapture of understanding I saw a vision: A certain vessel descended like a great sheet let down from heaven by the four corners, and it came unto me,