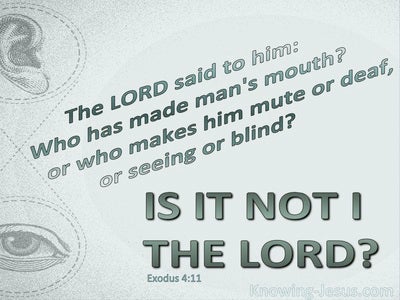 And the Lord said to him, Who has made man's mouth? Or who makes the dumb, or the deaf, or the seeing, or the blind? Is it not I, the Lord?

The Lord will smite you with madness and blindness and dismay of [mind and] heart.

And they struck the men who were at the door of the house with blindness [which dazzled them], from the youths to the old men, so that they wearied themselves [groping] to find the door.

Let their eyes be darkened so that they cannot see, and make their loins tremble continually [from terror, dismay, and feebleness].

Then Saul got up from the ground, but though his eyes were opened, he could see nothing; so they led him by the hand and brought him into Damascus. And he was unable to see for three days, and he neither ate nor drank [anything].

And since I could not see because [of the dazzlingly glorious intensity] of the brightness of that light, I was led by the hand by those who were with me, and [thus] I arrived in Damascus.

And now, behold, the hand of the Lord is upon you, and you will be blind, [so blind that you will be] unable to see the sun for a time. Instantly there fell upon him a mist and a darkness, and he groped about seeking persons who would lead him by the hand.

And I will bring distress upon men, so that they shall walk like blind men, because they have sinned against the Lord; their blood shall be poured out like dust and their flesh like dung.

Deuteronomy 29:4
Verse Concepts
Those Who Were IgnorantHearingSpirit, Emotional Aspects Of
Refusing To HearEars

Yet the Lord has not given you a [mind and] heart to understand and eyes to see and ears to hear, to this day.

Then Jesus said, I came into this world for judgment [as a Separator, in order that there may be separation between those who believe on Me and those who reject Me], to make the sightless see and to make those who see become blind.

Let their eyes be darkened (dimmed) so that they cannot see, and make them bend their back [stooping beneath their burden] forever.