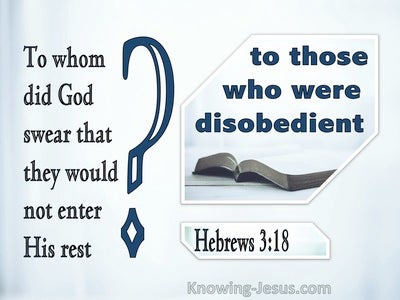 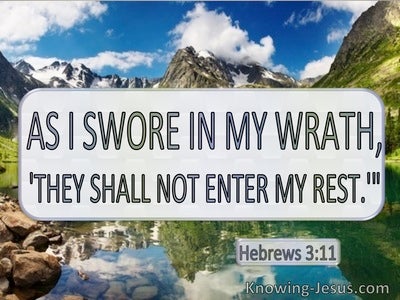 "Because," he said, "a fist has been raised in defiance against the throne of the LORD, the LORD will wage war against Amalek from generation to generation."

So in my anger I declared an oath: "They are not to enter my place of rest."

So in my anger I swore a solemn oath that they would never enter my rest."

And to whom did he swear that they would never enter his rest? It was to those who disobeyed him, was it not?

We who have believed are entering that rest, just as he has said, "So in my anger I swore a solemn oath that they would never enter my rest,"

Ezekiel 20:15
Verse Concepts
Milk And HoneyJudgement In The Wilderness
Exclusion

"Moreover, I solemnly swore to them in the wilderness that I wouldn't bring them to the land that I had given them a land flowing with milk and honey, the most beautiful of all lands

"Futhermore, I solemnly swore in the wilderness to disperse them among the nations and scatter them to other lands

"Therefore this is what the Lord GOD says: "I hereby raise my hand to swear this oath: the nations that surround you will have their own mockery to endure!

So he swore an oath concerning them that he would cause them to die in the wilderness,

Therefore I've sworn concerning Eli's family that the iniquity of his family is not to be atoned for by sacrifice or offering forever."

The LORD of the Heavenly Armies has declared this so I could hear it: "Surely many houses will become desolate, great and beautiful houses, without occupants.