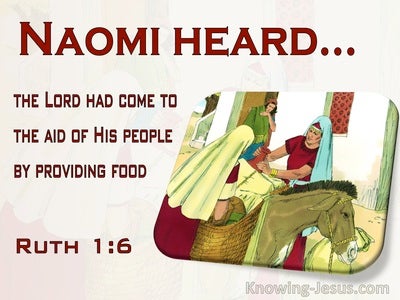 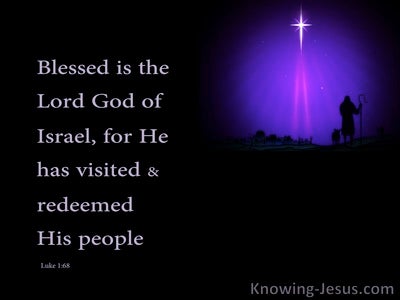 Later, Joseph told his brothers, "I'm going to die soon, but God will certainly provide for you and bring you up from this land to the land that he promised with an oath to give to Abraham, Isaac, and Jacob."

So Joseph made all of Israel's other children make this promise: "Because God is certainly going to take care of you, you are to carry my bones up from here."

Moses took the bones of Joseph with him, because Joseph had made the Israelis take this solemn oath: "God will certainly take notice of you, and then you must carry my bones up with you from here."

Ruth 1:6
Verse Concepts
Daughters In Law
Love, And The World

She and her daughters-in-law prepared to return from the country of Moab, because she had heard while living there how the LORD had come to the aid of his people, giving them relief.

You take care of the earth, you water it, and you enrich it greatly with the river of God that overflows with water. You provide grain for them, for you have ordained it this way.

Fear gripped everyone, and they began to praise God. "A great prophet has appeared among us," they said, and "God has helped his people."

"Blessed be the Lord God of Israel! He has taken care of his people and has set them free.

"They'll go into Babylon and there they'll remain until the time I take note of them," declares the LORD. "Then I'll bring them up and return them to this place."'"

The LORD took note of Hannah, and she became pregnant and gave birth to three sons and two daughters. Meanwhile, the boy Samuel continued to grow, and the LORD was constantly with him.

At the end of 70 years, the LORD will deal with Tyre, at which time she'll return to her courtesan's trade, and prostitute herself with the kingdoms of the world on the surface of the earth.

What will you do on the day of Judgment, in the calamity that will come from far away? To whom will you run for help, and where will you leave your wealth,

They will level you to the ground you and those who live within your city limits. They will not leave one stone on another within your walls, because you didn't recognize the time when you were visited."

Continue to live such upright lives among the gentiles that, when they slander you as practicers of evil, they may see your good actions and glorify God when he visits them.