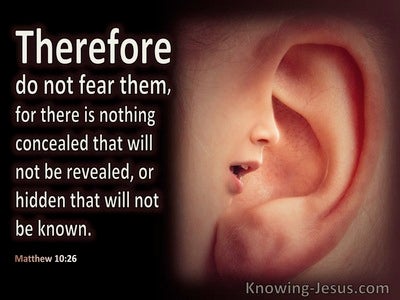 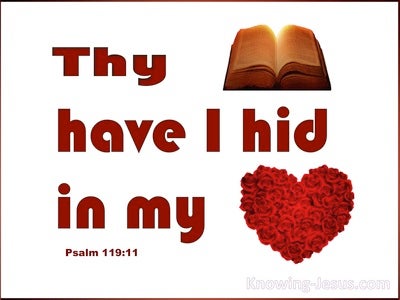 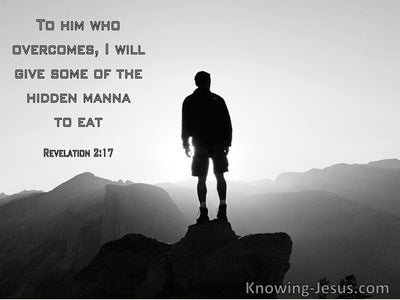 I was afraid, and went away and hid your talent in the earth. See, you have what is yours.'

Another came, saying, 'Lord, look, your mina, which I kept laid away in a handkerchief,

"Take the belt that you have bought, which is on your waist, and arise, go to the Euphrates, and hide it there in a cleft of the rock."

"Take great stones in your hand, and hide them in mortar in the brick work, which is at the entry of Pharaoh's house in Tahpanhes, in the sight of the men of Judah;

In my heart I have hidden your word, that I might not sin against you.

He spoke another parable to them. "The Kingdom of Heaven is like yeast, which a woman took, and hid in three measures of meal, until it was all leavened."

It is like yeast, which a woman took and hid in three measures of flour, until it was all leavened."

"The Kingdom of Heaven is like a treasure hidden in the field, which a man found, and hid. In his joy, he goes and sells all that he has, and buys that field.

Mark 4:22
Verse Concepts
Everything Happening For A ReasonDisclosures
From Darkness To LightAvoiding Secrecy

He who has an ear, let him hear what the Spirit says to the churches. To him who overcomes, to him I will give of the hidden manna, and I will give him a white stone, and on the stone a new name written, which no one knows but he who receives it.

The proud have hidden a snare for me, they have spread the cords of a net by the path. They have set traps for me. Selah.

The nations have sunk down in the pit that they made. In the net which they hid, their own foot is taken.