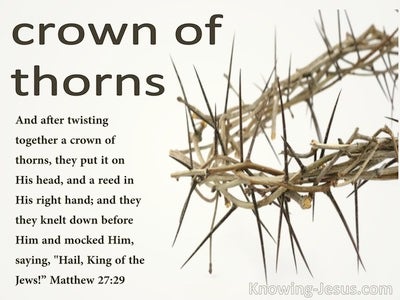 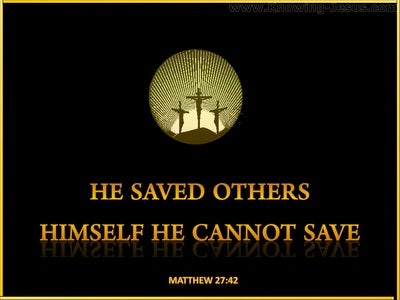 When he said this, one of the officers standing nearby slapped Jesus on the face and demanded, "Is that any way to answer the high priest?"

They answered him, "If he weren't a criminal, we wouldn't have handed him over to you."

When they had finished making fun of him, they stripped him of the robe, put his own clothes back on him, and led him away to crucify him.

Those who passed by kept insulting him, shaking their heads, and saying, "You who were going to destroy the sanctuary and rebuild it in three days save yourself! If you're the Son of God, come down from the cross!" In the same way the high priests, along with the scribes and elders, were also making fun of him. They kept saying, read more.
"He saved others but can't save himself! He is the king of Israel. Let him come down from the cross now, and we will believe in him. He trusts in God. Let God rescue him, if he wants to do so now. After all, he said, "I am the Son of God.'" In a similar way, the bandits who were being crucified with him kept insulting him.

At that time they were holding a notorious prisoner named Barabbas. So when the people had gathered, Pilate asked them, "Which man do you want me to release for you Barabbas, or Jesus who is called "the Messiah'?" He did this because he knew that they had handed him over out of jealousy.read more.
While he was sitting on the judge's seat, his wife sent him a message that said, "Have nothing to do with that righteous man, because today I have suffered terribly due to a dream I had about him." But the high priests and elders persuaded the crowds to ask for Barabbas and to demand that Jesus be put to death. So the governor asked them, "Which of the two men do you want me to release for you?" "Barabbas!" they replied.

There they crucified him, along with two others, one on each side of him with Jesus in the middle.