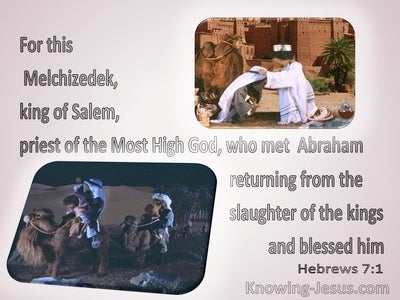 2 Samuel 1:14
Verse Concepts
Why Do You Do This?
The Lord's Anointed

David said to him, "How were you not afraid to put forth your hand to destroy the LORD's anointed?"

So Bethel will do to you because of your great wickedness. At daybreak the king of Israel will be destroyed.

For this Melchizedek, king of Salem, priest of God Most High, who met Abraham returning from the slaughter of the kings and blessed him,

Joshua turned back at that time, and took Hazor, and struck its king with the sword: for Hazor used to be the head of all those kingdoms.

And Zimri went in and struck him, and killed him, in the twenty-seventh year of Asa king of Judah, and reigned in his place.

Baasha the son of Ahijah, of the house of Issachar, conspired against him; and Baasha struck him at Gibbethon, which belonged to the Philistines; for Nadab and all Israel were laying siege to Gibbethon.

1 Kings 15:28
Verse Concepts
Kings Of The Northern Kingdom
List Of Kings Of Israel

Even in the third year of Asa king of Judah, Baasha killed him, and reigned in his place.

2 Kings 9:24
Verse Concepts
Other References To The HeartBow And Arrows, Uses OfArrows, Described As
Heart, HumanArchers, Men Shot By

Jehu drew his bow with his full strength, and struck Joram between his arms; and the arrow went out at his heart, and he sunk down in his chariot.

As Jehu entered in at the gate, she said, "Do you come in peace, Zimri, you murderer of your master?"

The servants of Amon conspired against him, and put the king to death in his own house.

They made a conspiracy against him in Jerusalem; and he fled to Lachish: but they sent after him to Lachish, and killed him there.

2 Kings 15:10
Verse Concepts
Kings Of The Northern KingdomList Of Kings Of Israel
Conspiracies

Shallum the son of Jabesh conspired against him, and struck him before the people, and killed him, and reigned in his place.

2 Kings 15:14
Verse Concepts
Kings Of The Northern Kingdom
List Of Kings Of Israel

Pekah the son of Remaliah, his captain, conspired against him, and struck him in Samaria, in the citadel of the king's house, with Argob and Arieh; and with him were fifty men of the Gileadites: and he killed him, and reigned in his place.

2 Kings 15:30
Verse Concepts
Kings Of The Northern KingdomList Of Kings Of Israel
Conspiracies

Hoshea the son of Elah made a conspiracy against Pekah the son of Remaliah, and struck him, and killed him, and reigned in his place, in the twentieth year of Jotham the son of Uzziah.

In his days Pharaoh Necoh king of Egypt went up against the king of Assyria to the river Euphrates: and king Josiah went against him; and Pharaoh Necoh killed him at Megiddo, when he had seen him.

Then arose Ishmael the son of Nethaniah, and the ten men who were with him, and struck Gedaliah the son of Ahikam the son of Shaphan with the sword, and killed him, whom the king of Babylon had made governor over the land.

because of the Chaldeans; for they were afraid of them, because Ishmael the son of Nethaniah had killed Gedaliah the son of Ahikam, whom the king of Babylon made governor over the land.

For Amos says, 'Jeroboam will die by the sword, and Israel shall surely be led away captive out of his land.'"

Afterward Joshua struck them, put them to death, and hanged them on five trees. They were hanging on the trees until the evening.

from Mount Halak, that goes up to Seir, even to Baal Gad in the valley of Lebanon under Mount Hermon. He took all their kings, struck them, and put them to death.

Samuel said, "As your sword has made women childless, so your mother will be childless among women." Samuel cut Agag in pieces before the LORD in Gilgal.

So I stood beside him, and killed him, because I was sure that he could not live after that he had fallen. I took the crown that was on his head, and the bracelet that was on his arm, and have brought them here to my lord."

David said to him, "Your blood be on your head; for your mouth has testified against you, saying, 'I have slain the LORD's anointed.'"

It happened on the next day, that he took a thick cloth, dipped it in water, and spread it on his face, so that he died. Then Hazael reigned in his place.

It happened, as he was worshipping in the house of Nisroch his god, that Adrammelech and Sharezer struck him with the sword; and they escaped into the land of Ararat. Esar Haddon his son reigned in his place.

It happened, as he was worshipping in the house of Nisroch his god, that Adrammelech and Sharezer his sons struck him with the sword; and they escaped into the land of Ararat. Esar Haddon his son reigned in his place.

Daniel 5:30
Verse Concepts
At The Same Time
Death Of The Wicked, Examples Of

In that night Belshazzar the Chaldean King was slain.