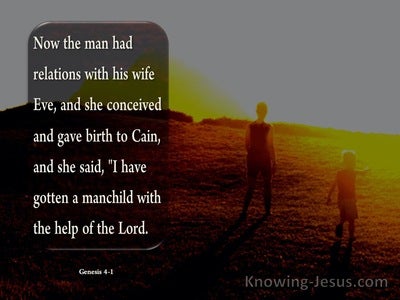 Adam was intimate with his wife Eve, and she conceived and gave birth to Cain. She said, “I have had a male child with the Lord’s help.”

Adam was intimate with his wife again, and she gave birth to a son and named him Seth, for she said, “God has given me another child in place of Abel, since Cain killed him.”

Cain was intimate with his wife, and she conceived and gave birth to Enoch. Then Cain became the builder of a city, and he named the city Enoch after his son.

The Nephilim were on the earth both in those days and afterward, when the sons of God came to the daughters of mankind, who bore children to them. They were the powerful men of old, the famous men.

He slept with Hagar, and she became pregnant. When she realized that she was pregnant, she treated her mistress with contempt.

That evening, Laban took his daughter Leah and gave her to Jacob, and he slept with her.

But Leah replied to her, “Isn’t it enough that you have taken my husband? Now you also want to take my son’s mandrakes?”“Well,” Rachel said, “you can sleep with him tonight in exchange for your son’s mandrakes.”

When Jacob came in from the field that evening, Leah went out to meet him and said, “You must come with me, for I have hired you with my son’s mandrakes.” So Jacob slept with her that night.

Jacob slept with Rachel also, and indeed, he loved Rachel more than Leah. And he worked for Laban another seven years.

Then she said, “Here is my slave Bilhah. Go sleep with her, and she’ll bear children for me so that through her I too can build a family.”

So Rachel gave her slave Bilhah to Jacob as a wife, and he slept with her.

There Judah saw the daughter of a Canaanite named Shua; he took her as a wife and slept with her.

Boaz took Ruth and she became his wife. When he was intimate with her, the Lord enabled her to conceive, and she gave birth to a son.

The next morning Elkanah and Hannah got up early to bow in worship before the Lord. Afterward, they returned home to Ramah. Then Elkanah was intimate with his wife Hannah, and the Lord remembered her.

Then David comforted his wife Bathsheba; he went and slept with her. She gave birth to a son and named him Solomon. The Lord loved him,

Now Absalom had appointed Amasa over the army in Joab’s place. Amasa was the son of a man named Ithra the Israelite; Ithra had married Abigail daughter of Nahash. Abigail was a sister to Zeruiah, Joab’s mother.

23 He slept with his wife, and she conceived and gave birth to a son. So he named him Beriah, because there had been misfortune in his home.

During the year before each young woman’s turn to go to King Ahasuerus, the harem regulation required her to receive beauty treatments with oil of myrrh for six months and then with perfumes and cosmetics for another six months.

While Israel was living in that region, Reuben went in and slept with his father’s concubine Bilhah, and Israel heard about it.Jacob had 12 sons:

Adam was intimate with his wife Eve, and she conceived and gave birth to Cain. She said, “I have had a male child with the Lord’s help.”

If a man encounters a young woman, a virgin who is not engaged, takes hold of her and rapes her, and they are discovered,