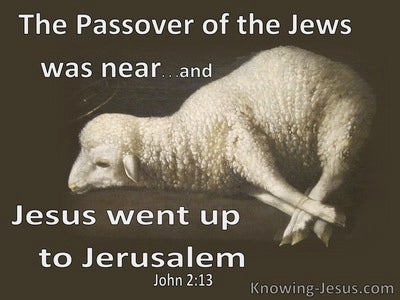 and to them that sold the doves he said, Take these things hence; make not my Father's house a house of merchandise.

For we are not as the many, corrupting the word of God: but as of sincerity, but as of God, in the sight of God, speak we in Christ.

and he saith unto them, It is written, My house shall be called a house of prayer: but ye make it a den of robbers.

and when they come from the market-place, except they bathe themselves, they eat not; and many other things there are, which they have received to hold, washings of cups, and pots, and brasen vessels.)

And Jesus entered into the temple of God, and cast out all them that sold and bought in the temple, and overthrew the tables of he money-changers, and the seats of them that sold the doves;

So he reasoned in the synagogue with Jews and the devout persons, and in the marketplace every day with them that met him.

Commit thy works unto Jehovah, And thy purposes shall be established.

And Elisha said, Hear ye the word of Jehovah: thus saith Jehovah, To-morrow about this time shall a measure of fine flour be'sold for a shekel, and two measures of barley for a shekel, in the gate of Samaria.

John 2:14
Verse Concepts
Christ In The TemplePollutionsSheep
dovesMoney, Uses Of

And he found in the temple those that sold oxen and sheep and doves, and the changers of money sitting:

He that withholdeth grain, the people shall curse him; But blessing shall be upon the head of him that selleth it.

Beware of the scribes, who desire to walk in long robes, and love salutations in the marketplaces, and chief seats in the synagogues, and chief places at feasts;

yea, they shall be afraid of that which is high, and terrors'shall be in the way; and the almond-tree shall blossom, and the grasshopper shall be a burden, and desire shall fail; because man goeth to his everlasting home, and the mourners go about the streets:

And the passover of the Jews was at hand, and Jesus went up to Jerusalem.

But this I say, brethren, the time is shortened, that henceforth both those that have wives may be as though they had none;

saying, When will the new moon be gone, that we may sell grain? and the sabbath, that we may set forth wheat, making the ephah small, and the shekel great, and dealing falsely with balances of deceit;

And he spake a parable unto those that were bidden, when he marked how they chose out the chief seats; saying unto them,