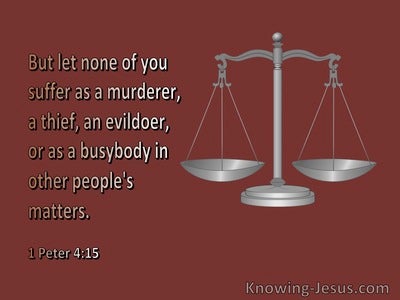 But he sent messengers to him, who asked him, "What do we have in common, King of Judah? I am not here today opposing you. I am fighting the dynasty that is fighting me, and God has ordered me to hurry. For your own good, stop interfering with God, who is with me, and he won't destroy you!" But Josiah wouldn't turn around. In fact, he put on a disguise so he could fight Neco. He wouldn't listen to what God told him through what Neco had to say, and as a result, Josiah came to attack Neco on the Megiddo plain. Some archers shot King Josiah, and the king told his servants, "Take me away, because I'm badly wounded." read more.
So his servants removed him from the chariot he was in and carried him away in a backup chariot that he had and took him back to Jerusalem, where he died and was buried in the tombs of his ancestors. All of Judah and Jerusalem went into mourning for Josiah.

1 Peter 4:15
Verse Concepts
Do Not MurderthievesMinding Your Own Business
FraudEvildoersBusybodies

Of course, none of you should suffer for being a murderer, thief, criminal, or troublemaker.

We hear that some of you are living in idleness. You are not busy working you are busy interfering in other people's lives!

"You are not to spread a false report, nor are you to join forces with the wicked to be a malicious witness.

Picking up a dog by the ears that's what someone is like who meddles in another's fight.

At the same time, they also learn how to be lazy while going from house to house. Not only this, but they even become gossips and keep busy by interfering in other people's lives, saying things they should not say.