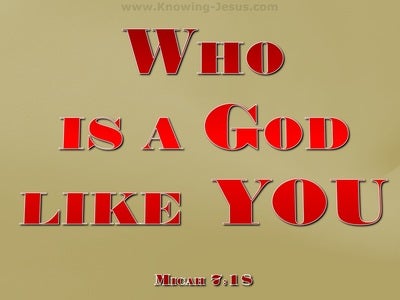 and My people who are called by My name humble themselves and pray and seek My face and turn from their wicked ways, then I will hear from heaven, will forgive their sin and will heal their land.

“Blessed are those who mourn, for they shall be comforted.

Who is a God like You, who pardons iniquity
And passes over the rebellious act of the remnant of His possession?
He does not retain His anger forever,
Because He delights in unchanging love.

The Lord is near to the brokenhearted
And saves those who are crushed in spirit.

When the king of Egypt was told that the people had fled, Pharaoh and his servants had a change of heart toward the people, and they said, "What is this we have done, that we have let Israel go from serving us?" So he made his chariot ready and took his people with him; and he took six hundred select chariots, and all the other chariots of Egypt with officers over all of them. read more.
The LORD hardened the heart of Pharaoh, king of Egypt, and he chased after the sons of Israel as the sons of Israel were going out boldly. Then the Egyptians chased after them with all the horses and chariots of Pharaoh, his horsemen and his army, and they overtook them camping by the sea, beside Pi-hahiroth, in front of Baal-zephon.

Then Pharaoh sent for Moses and Aaron, and said to them, "I have sinned this time; the LORD is the righteous one, and I and my people are the wicked ones. "Make supplication to the LORD, for there has been enough of God's thunder and hail; and I will let you go, and you shall stay no longer." Moses said to him, "As soon as I go out of the city, I will spread out my hands to the LORD; the thunder will cease and there will be hail no longer, that you may know that the earth is the LORD'S. read more.
"But as for you and your servants, I know that you do not yet fear the LORD God."

Pharaoh arose in the night, he and all his servants and all the Egyptians, and there was a great cry in Egypt, for there was no home where there was not someone dead. Then he called for Moses and Aaron at night and said, "Rise up, get out from among my people, both you and the sons of Israel; and go, worship the LORD, as you have said.

But now he has died; why should I fast? Can I bring him back again?

So Nathan went to his house. David therefore inquired of God for the child; and David fasted and went and lay all night on the ground.

"All this happened to Nebuchadnezzar the king. "Twelve months later he was walking on the roof of the royal palace of Babylon. "The king reflected and said, 'Is this not Babylon the great, which I myself have built as a royal residence by the might of my power and for the glory of my majesty?' read more.
"While the word was in the king's mouth, a voice came from heaven, saying, 'King Nebuchadnezzar, to you it is declared: sovereignty has been removed from you, and you will be driven away from mankind, and your dwelling place will be with the beasts of the field You will be given grass to eat like cattle, and seven periods of time will pass over you until you recognize that the Most High is ruler over the realm of mankind and bestows it on whomever He wishes.' "Immediately the word concerning Nebuchadnezzar was fulfilled; and he was driven away from mankind and began eating grass like cattle, and his body was drenched with the dew of heaven until his hair had grown like eagles' feathers and his nails like birds' claws. "But at the end of that period, I, Nebuchadnezzar, raised my eyes toward heaven and my reason returned to me, and I blessed the Most High and praised and honored Him who lives forever; For His dominion is an everlasting dominion, And His kingdom endures from generation to generation. "All the inhabitants of the earth are accounted as nothing, But He does according to His will in the host of heaven And among the inhabitants of earth; And no one can ward off His hand Or say to Him, 'What have You done?' "At that time my reason returned to me And my majesty and splendor were restored to me for the glory of my kingdom, and my counselors and my nobles began seeking me out; so I was reestablished in my sovereignty, and surpassing greatness was added to me. "Now I, Nebuchadnezzar, praise, exalt and honor the King of heaven, for all His works are true and His ways just, and He is able to humble those who walk in pride."