15 Bible Verses about Plenty For The Poor 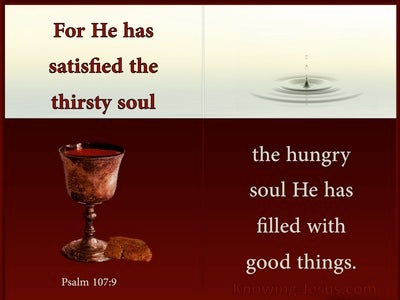 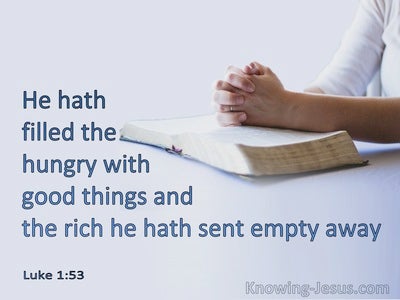 He has satisfied the one who thirsts, filling the hungry with what is good.

He filled hungry people with good things and sent rich people away with nothing.

The field of the poor may produce much food, but it can be swept away through injustice.

Those who had an abundance of bread now hire themselves out, and those who were hungry hunger no more. While the barren woman gives birth to seven children, she who had many children languishes.

Psalm 22:26
Verse Concepts
I Will Praise You With MusicGod Feeds All The EarthPenitentBad Leadership
Praising GodExploitationsEatingSatisfaction

The afflicted will eat and be satisfied; those who seek the LORD will praise him, "May you live forever!"

I will bless its provisions abundantly; I will satiate its poor with food.

because this is what the LORD God of Israel says: "That jar of flour will not run out, nor will that bottle of oil become empty until the very day that the LORD sends rain on the surface of the ground.'"

The jar of flour never ran out and the bottle of oil never became empty, just as the LORD had promised through Elijah.

So she left Elisha, shut the door behind her and her children, and while they kept on bringing vessels to her, she kept on pouring oil. When the last of the vessels had been filled, she told her son, "Bring me another pot!"

Whoever gives to the poor will never lack, but whoever shuts his eyes to their poverty will be cursed.

since none of them needed anything, because everyone who had land or houses would sell them and bring the money received for the things sold

At the present time, your surplus fills their need, so that their surplus may fill your need. In this way things are fair.

and one of you tells them, "Go in peace! Stay warm and eat heartily." If you do not provide for their bodily needs, what good does it do?