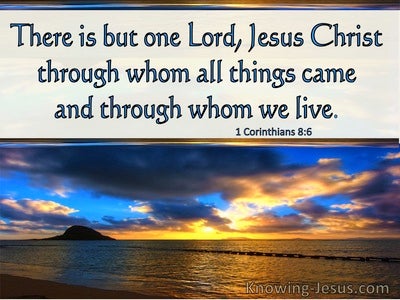 Their land is full of idols;
they bow down to the work of their hands,
to what their fingers have made.

Has a nation ever exchanged its gods?
(But they were not gods!)
Yet My people have exchanged their Glory
for useless idols.

For even if there are so-called gods, whether in heaven or on earth—as there are many “gods” and many “lords”—

“Whoever sacrifices to any gods, except the Lord alone, is to be set apart for destruction.

Then the Israelites again did what was evil in the sight of the Lord. They worshiped the Baals and the Ashtoreths, the gods of Aram, Sidon, and Moab, and the gods of the Ammonites and the Philistines. They abandoned Yahweh and did not worship Him.

“Tell the Israelites: When you cross the Jordan into the land of Canaan, you must drive out all the inhabitants of the land before you, destroy all their stone images and cast images, and demolish all their high places.

They rejected His statutes and His covenant He had made with their ancestors and the decrees He had given them. They pursued worthless idols and became worthless themselves, following the surrounding nations the Lord had commanded them not to imitate. They abandoned all the commands of the Lord their God. They made cast images for themselves, two calves, and an Asherah pole. They worshiped the whole heavenly host and served Baal. They made their sons and daughters pass through the fire and practiced divination and interpreted omens. They devoted themselves to do what was evil in the Lord’s sight and provoked Him.read more.
Therefore, the Lord was very angry with Israel, and He removed them from His presence. Only the tribe of Judah remained.

He banished the male cult prostitutes from the land and removed all of the idols that his fathers had made. He also removed his grandmother Maacah from being queen mother because she had made an obscene image of Asherah. Asa chopped down her obscene image and burned it in the Kidron Valley.

“Do not make idols for yourselves, set up a carved image or sacred pillar for yourselves, or place a sculpted stone in your land to bow down to it, for I am Yahweh your God.

They also built for themselves high places, sacred pillars, and Asherah poles on every high hill and under every green tree;

For as I was passing through and observing the objects of your worship, I even found an altar on which was inscribed:TO AN UNKNOWN GOD. Therefore, what you worship in ignorance, this I proclaim to you.

You know that when you were pagans, you used to be led off to the idols that could not speak.

While Paul was waiting for them in Athens, his spirit was troubled within him when he saw that the city was full of idols.

You both see and hear that not only in Ephesus, but in almost all of Asia, this man Paul has persuaded and misled a considerable number of people by saying that gods made by hand are not gods!

For His invisible attributes, that is, His eternal power and divine nature, have been clearly seen since the creation of the world, being understood through what He has made. As a result, people are without excuse. For though they knew God, they did not glorify Him as God or show gratitude. Instead, their thinking became nonsense, and their senseless minds were darkened. Claiming to be wise, they became foolsread more.
and exchanged the glory of the immortal God for images resembling mortal man, birds, four-footed animals, and reptiles.

What am I saying then? That food offered to idols is anything, or that an idol is anything? No, but I do say that what they sacrifice, they sacrifice to demons and not to God. I do not want you to participate with demons!