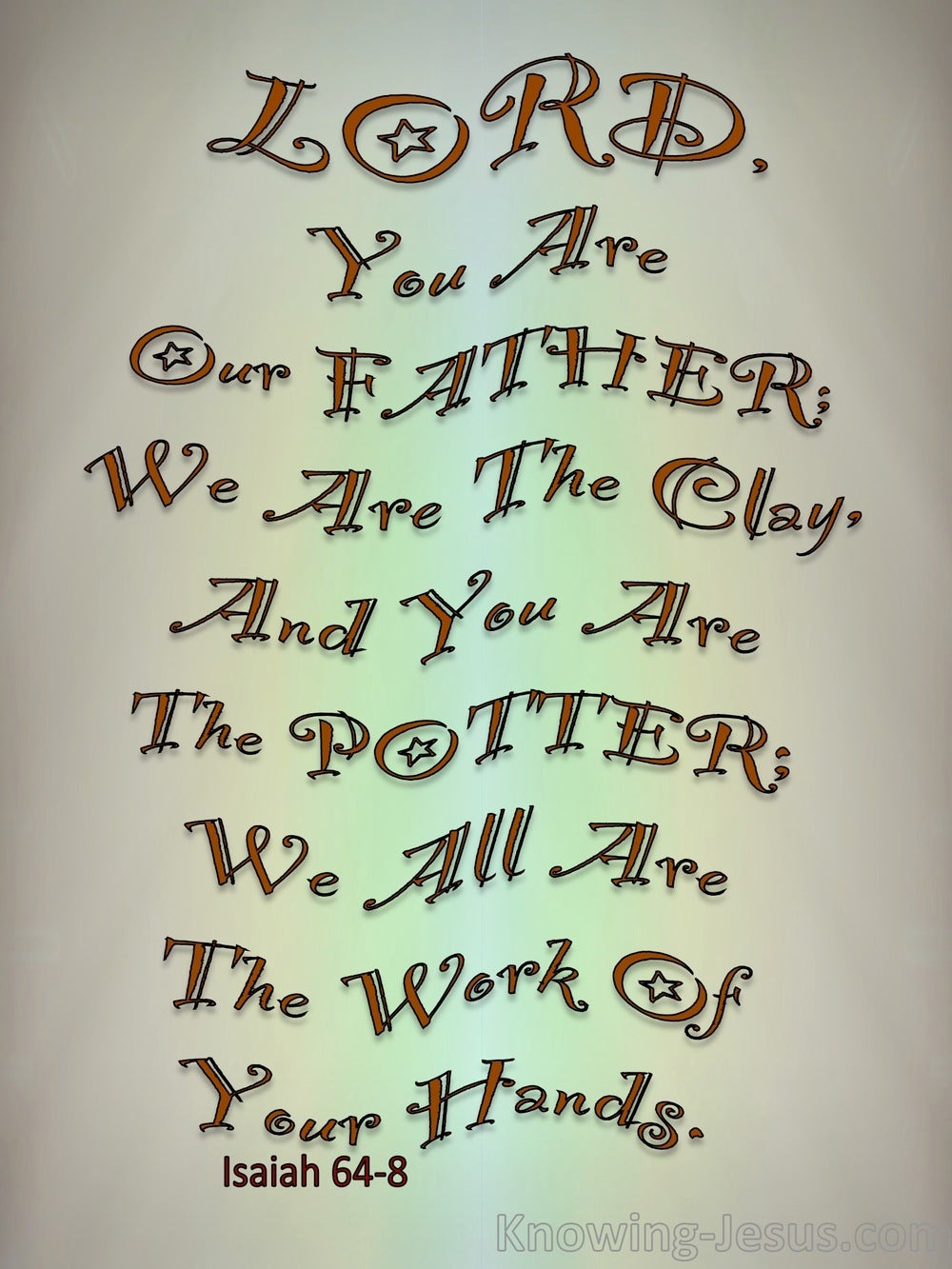 “I have aroused one from the north, and he has come;
From the rising of the sun he will call on My name;
And he will come upon rulers as upon mortar,
Even as the potter treads clay.”

Now when David had come to Mahanaim, Shobi the son of Nahash from Rabbah of the sons of Ammon, Machir the son of Ammiel from Lo-debar, and Barzillai the Gileadite from Rogelim, brought beds, basins, pottery, wheat, barley, flour, parched grain, beans, lentils, parched seeds, honey, curds, sheep, and cheese of the herd, for David and for the people who were with him, to eat; for they said, “The people are hungry and weary and thirsty in the wilderness.”

The sons of Shelah the son of Judah were Er the father of Lecah and Laadah the father of Mareshah, and the families of the house of the linen workers at Beth-ashbea; and Jokim, the men of Cozeba, Joash, Saraph, who ruled in Moab, and Jashubi-lehem. And the records are ancient. These were the potters and the inhabitants of Netaim and Gederah; they lived there with the king for his work.

You turn things around!
Shall the potter be considered as equal with the clay,
That what is made would say to its maker, “He did not make me”;
Or what is formed say to him who formed it, “He has no understanding”?

“Woe to the one who quarrels with his Maker—
An earthenware vessel among the vessels of earth!
Will the clay say to the potter, ‘What are you doing?’
Or the thing you are making say, ‘He has no hands’?

But now, O Lord, You are our Father,
We are the clay, and You our potter;
And all of us are the work of Your hand.

Thus says the Lord, “Go and buy a potter’s earthenware jar, and take some of the elders of the people and some of the senior priests.

You will say to me then, “Why does He still find fault? For who resists His will?” On the contrary, who are you, O man, who answers back to God? The thing molded will not say to the molder, “Why did you make me like this,” will it? Or does not the potter have a right over the clay, to make from the same lump one vessel for honorable use and another for common use?

Or does not the potter have a right over the clay, to make from the same lump one vessel

Pottery » Vessels made of

Then I went down to the potter's house, and there he was, making something on the wheel. But the vessel that he was making of clay was spoiled in the hand of the potter; so he remade it into another vessel, as it pleased the potter to make.

Pottery » Clay prepared for, by treading

Pottery » Figurative » Of weakness, in the idol in nebuchadnezzars vision

Daniel 2:41
Verse Concepts
ToesThings Like Iron
The Kingdom Of Otherstoughness

In that you saw the feet and toes, partly of potter’s clay and partly of iron, it will be a divided kingdom; but it will have in it the toughness of iron, inasmuch as you saw the iron mixed with