16 Bible Verses about Reading Other Matter 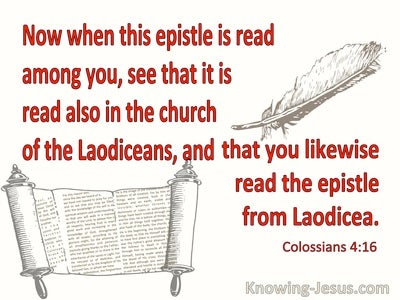 And Zephaniah the priest read this letter in the ears of Jeremiah the prophet.

which when they had read, they rejoiced for the consolation.

And when this epistle is read among you, cause that it be read also in the congregation of the Laodiceans, and that ye likewise read the epistle from Laodicea.

1 Thessalonians 5:27
Verse Concepts
LettersLiteracyNames And Titles For The Christian
AdjurationReading

I charge you by the Lord that this epistle be read unto all the holy brethren.

Then all the king's wise men came in, but they could not read the writing, nor make known to the king its interpretation.

And now the wise men, the astrologers, have been brought in before me that they should read this writing and make known unto me its interpretation, but they could not show the interpretation of the thing:

The king cried in a loud voice that they bring in the magicians, the Chaldeans, and the fortune-tellers. The king spoke and said to the wise men of Babylon, Whoever shall read this writing and show me its interpretation, shall be clothed with purple and have a chain of gold about his neck and shall be the third ruler in the kingdom.

Then Daniel answered and said before the king, Let thy gifts be for thyself and give thy rewards to another; yet I will read the writing unto the king and show him the interpretation.

And I have heard of thee, that thou canst declare that which is in doubt and unravel difficulties: now if thou canst read this writing and show me its interpretation, thou shalt be clothed with purple and have a chain of gold about thy neck and shalt be the third ruler in the kingdom.

And many of the Jews read this title, for the place where Jesus was crucified was near to the city; and it was written in Hebrew and Greek and Latin.

For we write no other things unto you than what ye read or also know, and I trust ye shall know them even to the end

Ye are our epistle written in our hearts, known and read of all men:

On that night the king could not sleep, and he commanded to bring the book of records of the chronicles, and they were read before the king.

The letter which you sent unto us has been plainly read before me.

Now when the copy of King Artaxerxes' letter was read before Rehum, and Shimshai, the scribe, and their companions, they went up in haste to Jerusalem unto the Jews and made them to cease by force and power.