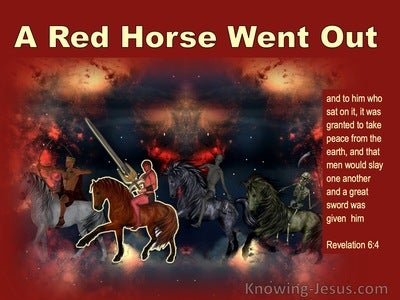 This is the ordinance of the law which the LORD has commanded, saying, Speak unto the sons of Israel that they bring thee a red heifer, perfect, in which there is no blemish, and upon which there has never been placed a yoke;

I saw by night, and behold a man riding upon a red horse, and he stood among the myrtle trees that were in the bottom; and behind him there were red horses, speckled, and white.

In the first chariot were red horses and in the second chariot black horses;

And another horse went forth that was red, and unto him that was seated thereon was given power to take away the peace of the earth and that they should kill one another; and there was given unto him a great sword.