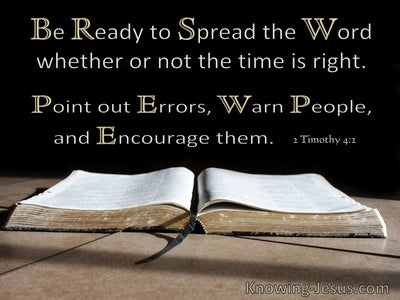 when he brings forth the chariot and horse, the army and the power; they shall fall together, and never rise; they are extinct; they are quenched as wick.

It shall be medicine to thy navel and marrow to thy bones.

So the workmen wrought, and by their hands the work was done, and they restored the house of God and strengthened it.

So many people gathered together, and they stopped up all the fountains and the brook that ran through the midst of the land, saying, Why should the kings of Assyria come and find much water?

For the Lord had made the host of the Syrians to hear a noise of chariots and a noise of horses, even the noise of a great host; and they said one to another, Behold, the king of Israel has hired against us the kings of the Hittites and the kings of the Egyptians, to come upon us.

Preach the word; be instant in season and out of season; reprove, rebuke, exhort with all longsuffering and doctrine.

Also he strengthened himself and built up all the wall that was broken and caused the towers to be raised up, and another wall outside, and repaired Millo in the city of David, and made swords and shields in abundance.

The man whose spirit has no restraint is like a city that is broken down and without walls.

Joshua 14:12
Verse Concepts
Land, As A Divine GiftGradual Conquest Of The LandLargenessFortificationsCourage, Examples Of
CityGiantsHelpfulnessGod Will Be With You

Now, therefore, give me this mountain, of which the LORD spoke in that day; for thou didst hear in that day how the Anakims were there and that the cities were great and strong; peradventure, the LORD will be with me, and I shall drive them out, as the LORD said.

with its collar in the midst of the robe, as the collar of a habergeon, with a band round about the collar that it should not rend.

These, thy merchants, negotiated with thee in all sorts of things: in blue robes and broidered work and in chests of rich apparel, bound with cords and made of cedar, among thy merchandise.

Woe to those that go down to Egypt for help; and trust in horses and place their hope in chariots because they are many and in horsemen, because they are valiant, but they did not look unto the Holy One of Israel, neither did they seek the LORD!

Moreover, the Hebrews that had been with the Philistines before that time, who had gone up with them into the camp from the country round about, even they also turned to be with the Israelites that were with Saul and Jonathan.

And he made two boards for the corners of the tabernacle in the two sides,

And the king of Assyria brought Gentiles from Babylon and from Cuthah and from Ava and from Hamath and from Sepharvaim, and placed them in the cities of Samaria instead of the sons of Israel; and they possessed Samaria and dwelt in the cities thereof.

And the people encouraged themselves, and the men of Israel set their battle again in order in the place where they put themselves in order the first day.

When Joab saw that there were troops before and behind him, he chose from among the chosen men of Israel and put them in order against the Syrians.

he shall run him through in the neck, upon the thick shoulder pieces of his shields;

The bows of the mighty men have been broken, and the weak are girded with strength.

Be it known unto the king that we went into the province of Judea, to the house of the great God, which is being built with stones of marble, and the timbers are laid in the walls, and this work is going fast and prospers in their hands.

Whereas thou hast been forsaken and hated, so that no man went through thee, I will place thee in eternal glory, in joy from generation to generation.

And the Philistines came up yet again and spread themselves in the valley of Rephaim.

But Pharaoh's daughter came up out of the city of David unto her house which Solomon had built for her; then he built Millo.

Now after this he built the wall outside the city of David, on the west side of Gihon, in the valley, and at the entrance of the fish gate, and fenced Ophel and raised it up to a very great height and put captains of the army in all the fenced cities of Judah.