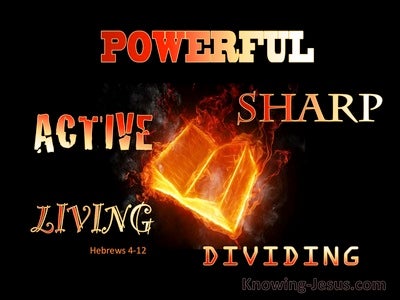 Then Zipporah took a sharp flint and cut off the foreskin of her son and cast it at his feet, saying, Surely a bloody husband art thou to me.

whose arrows are sharp, and all their bows bent; their horses' hoofs shall be counted like flint, and the wheels of their chariots like a whirlwind;

My soul is among lions, and I lie even among those that are set on fire, even the sons of men, whose teeth are spears and arrows and their tongue a sharp sword.

But her end is bitter as wormwood, sharp as a twoedged sword.

And he has made my mouth like a sharp sword; with the shadow of his hand he has covered me, and made me a clean arrow; in his quiver he has kept me.

For the word of God is alive and efficient and sharper than any twoedged sword, piercing even to the dividing asunder of soul and spirit, and of the joints and marrow, and is a discerner of the thoughts and intents of the heart.

Thy tongue devises wickedness like a sharp razor, working deceitfully.

A man that bears false witness against his neighbour is a maul and a sword and a sharp arrow.

And the contention was so sharp between them that they departed asunder one from the other, and so Barnabas took Mark and sailed unto Cyprus;

Therefore I write these things being absent lest being present I should treat you with more severity, according to the power which the Lord has given me for edification, and not for destruction.