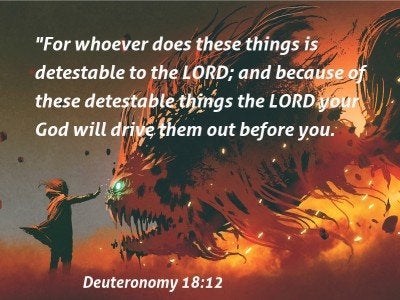 ‘Do not turn to mediums or spiritists; do not seek them out to be defiled by them. I am the Lord your God.

There shall not be found among you anyone who makes his son or his daughter pass through the fire, one who uses divination, one who practices witchcraft, or one who interprets omens, or a sorcerer, or one who casts a spell, or a medium, or a spiritist, or one who calls up the dead. For whoever does these things is detestable to the Lord; and because of these detestable things the Lord your God will drive them out before you.

‘Now a man or a woman who is a medium or a spiritist shall surely be put to death. They shall be stoned with stones, their bloodguiltiness is upon them.’”

‘As for the person who turns to mediums and to spiritists, to play the harlot after them, I will also set My face against that person and will cut him off from among his people.

He made his son pass through the fire, practiced witchcraft and used divination, and dealt with mediums and spiritists. He did much evil in the sight of the Lord provoking Him to anger.

He made his sons pass through the fire in the valley of Ben-hinnom; and he practiced witchcraft, used divination, practiced sorcery and dealt with mediums and spiritists. He did much evil in the sight of the Lord, provoking Him to anger.

So the Philistines gathered together and came and camped in Shunem; and Saul gathered all Israel together and they camped in Gilboa. When Saul saw the camp of the Philistines, he was afraid and his heart trembled greatly. When Saul inquired of the Lord, the Lord did not answer him, either by dreams or by Urim or by prophets.read more.
Then Saul said to his servants, “Seek for me a woman who is a medium, that I may go to her and inquire of her.” And his servants said to him, “Behold, there is a woman who is a medium at En-dor.” Then Saul disguised himself by putting on other clothes, and went, he and two men with him, and they came to the woman by night; and he said, “Conjure up for me, please, and bring up for me whom I shall name to you.” But the woman said to him, “Behold, you know what Saul has done, how he has cut off those who are mediums and spiritists from the land. Why are you then laying a snare for my life to bring about my death?” Saul vowed to her by the Lord, saying, “As the Lord lives, no punishment shall come upon you for this thing.” Then the woman said, “Whom shall I bring up for you?” And he said, “Bring up Samuel for me.” When the woman saw Samuel, she cried out with a loud voice; and the woman spoke to Saul, saying, “Why have you deceived me? For you are Saul.” The king said to her, “Do not be afraid; but what do you see?” And the woman said to Saul, “I see a divine being coming up out of the earth.” He said to her, “What is his form?” And she said, “An old man is coming up, and he is wrapped with a robe.” And Saul knew that it was Samuel, and he bowed with his face to the ground and did homage. Then Samuel said to Saul, “Why have you disturbed me by bringing me up?” And Saul answered, “I am greatly distressed; for the Philistines are waging war against me, and God has departed from me and no longer answers me, either through prophets or by dreams; therefore I have called you, that you may make known to me what I should do.” Samuel said, “Why then do you ask me, since the Lord has departed from you and has become your adversary? The Lord has done accordingly as He spoke through me; for the Lord has torn the kingdom out of your hand and given it to your neighbor, to David. As you did not obey the Lord and did not execute His fierce wrath on Amalek, so the Lord has done this thing to you this day. Moreover the Lord will also give over Israel along with you into the hands of the Philistines, therefore tomorrow you and your sons will be with me. Indeed the Lord will give over the army of Israel into the hands of the Philistines!” Then Saul immediately fell full length upon the ground and was very afraid because of the words of Samuel; also there was no strength in him, for he had eaten no food all day and all night.

Moreover, Josiah removed the mediums and the spiritists and the teraphim and the idols and all the abominations that were seen in the land of Judah and in Jerusalem, that he might confirm the words of the law which were written in the book that Hilkiah the priest found in the house of the Lord.

Now Samuel was dead, and all Israel had lamented him and buried him in Ramah, his own city. And Saul had removed from the land those who were mediums and spiritists.

When they say to you, “Consult the mediums and the spiritists who whisper and mutter,” should not a people consult their God? Should they consult the dead on behalf of the living?

“So I will incite Egyptians against Egyptians;
And they will each fight against his brother and each against his neighbor,
City against city and kingdom against kingdom.
“Then the spirit of the Egyptians will be demoralized within them;
And I will confound their strategy,
So that they will resort to idols and ghosts of the dead
And to mediums and spiritists.

‘Do not turn to

I have not eaten of it