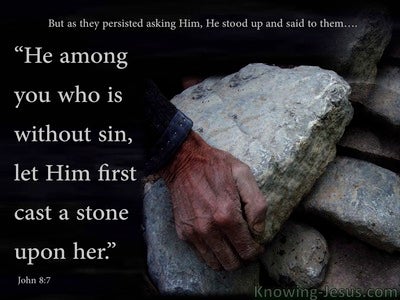 However, when they persisted with their question, He raised Himself up and said, Let him who is without sin among you be the first to throw a stone at her.

Among all these were 700 chosen left-handed men; every one could sling stones at a hair and not miss.

They were bowmen and could use the right hand or the left to sling stones or shoot arrows from the bow; they were of Saul's kinsmen of Benjamin.

No hand shall touch it [or the offender], but he shall surely be stoned or shot [with arrows]; whether beast or man, he shall not live. When the trumpet sounds a long blast, they shall come up to the mountain.

Then he took his staff in his hand and chose five smooth stones out of the brook and put them in his shepherd's [lunch] bag [a whole kid's skin slung from his shoulder], in his pouch, and his sling was in his hand, and he drew near the Philistine.

David put his hand into his bag and took out a stone and slung it, and it struck the Philistine, sinking into his forehead, and he fell on his face to the earth.

And he cast stones at David and at all the servants of King David; and all the people and all the mighty men were on his right hand and on his left.

So David and his men went by the road, and Shimei went along on the hillside opposite David and cursed as he went and threw stones and dust at him.

They beat down the cities [walls], and on every good piece of land every man cast a stone, covering it [with stones]. And they stopped all the springs of water and felled all the good trees, until only the stones [of the walls of Moab's capital city] of Kir-hareseth were left standing, and the slingers surrounded and took it.

Though man is risen up to pursue you and to seek your life, yet the life of my lord shall be bound in the living bundle with the Lord your God. And the lives of your enemies -- "them shall He sling out as out of the center of a sling.

Like he who binds a stone in a sling, so is he who gives honor to a [self-confident] fool.

The arrow cannot make [the crocodile] flee; slingstones are treated by him as stubble.

And He withdrew from them about a stone's throw and knelt down and prayed,