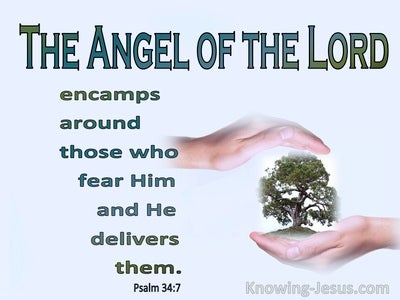 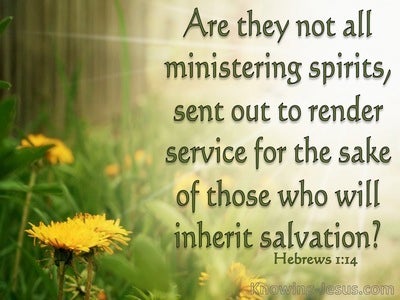 "The LORD God of heaven, who brought me from my father's house and from my family's land, who spoke to me and promised me "I will give this land to your descendants,' will send his angel ahead of you, and you are to acquire a wife for my son from there.

The angel of the LORD surrounds those who fear him, and he delivers them.

My God sent his angel and sealed the mouths of the lions. They have not harmed me, proving that I'm innocent before him. Also against you, your majesty, I've committed no offense."

Suddenly, an angel of the Lord appeared and a light shone in the cell. He tapped Peter on his side, woke him up, and said, "Get up quickly!" His chains fell from his wrists. Then the angel told him, "Tuck in your shirt and put on your sandals!" He did this. Then the angel told him, "Put on your coat and follow me!" So Peter went out and began to follow him, not realizing that what was being done by the angel was real; he thought he was seeing a vision. read more.
They passed the first guard, then the second, and came to the iron gate that led into the city. It opened by itself for them, and they went outside and proceeded one block when the angel suddenly left him. Then Peter came to himself and said, "Now I'm sure that the Lord has sent his angel and rescued me from Herod and from everything the Jewish people were expecting!"

Now an angel of the Lord told Philip, "Get up and go south on the road that leads from Jerusalem to Gaza. This is a deserted road."

For just last night an angel of God, to whom I belong and whom I serve, stood by me

All of them are spirits on a divine mission, sent to serve those who are about to inherit salvation, aren't they?