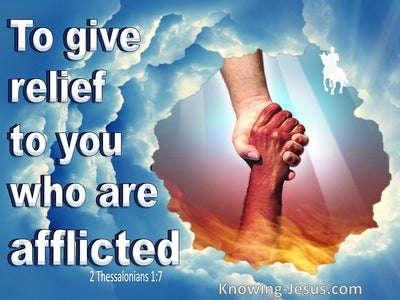 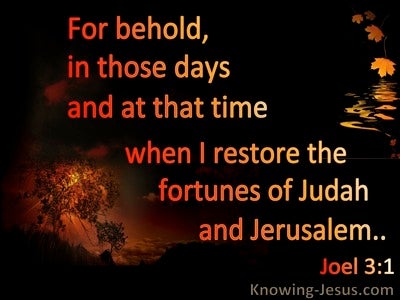 “I will surely tell of the decree of the Lord:
He said to Me, ‘You are My Son,
Today I have begotten You.
‘Ask of Me, and I will surely give the nations as Your inheritance,
And the very ends of the earth as Your possession.
‘You shall break them with a rod of iron,
You shall shatter them like earthenware.’”
read more.
Now therefore, O kings, show discernment;
Take warning, O judges of the earth.
Worship the Lord with reverence
And rejoice with trembling.
Do homage to the Son, that He not become angry, and you perish in the way,
For His wrath may soon be kindled.
How blessed are all who take refuge in Him!

For behold, the Lord will come in fire
And His chariots like the whirlwind,
To render His anger with fury,
And His rebuke with flames of fire.
For the Lord will execute judgment by fire
And by His sword on all flesh,
And those slain by the Lord will be many.

“For behold, in those days and at that time,
When I restore the fortunes of Judah and Jerusalem,
I will gather all the nations
And bring them down to the valley of Jehoshaphat.
Then I will enter into judgment with them there
On behalf of My people and My inheritance, Israel,
Whom they have scattered among the nations;
And they have divided up My land.

Beat your plowshares into swords
And your pruning hooks into spears;
Let the weak say, “I am a mighty man.”
Hasten and come, all you surrounding nations,
And gather yourselves there.
Bring down, O Lord, Your mighty ones.
Let the nations be aroused
And come up to the valley of Jehoshaphat,
For there I will sit to judge
All the surrounding nations.
read more.
Put in the sickle, for the harvest is ripe.
Come, tread, for the wine press is full;
The vats overflow, for their wickedness is great.
Multitudes, multitudes in the valley of decision!
For the day of the Lord is near in the valley of decision.
The sun and moon grow dark
And the stars lose their brightness.
The Lord roars from Zion
And utters His voice from Jerusalem,
And the heavens and the earth tremble.
But the Lord is a refuge for His people
And a stronghold to the sons of Israel.

“Therefore wait for Me,” declares the Lord,
“For the day when I rise up as a witness.
Indeed, My decision is to gather nations,
To assemble kingdoms,
To pour out on them My indignation,
All My burning anger;
For all the earth will be devoured
By the fire of My zeal.

and to give relief to you who are afflicted and to us as well when the Lord Jesus will be revealed from heaven with His mighty angels in flaming fire, dealing out retribution to those who do not know God and to those who do not obey the gospel of our Lord Jesus. These will pay the penalty of eternal destruction, away from the presence of the Lord and from the glory of His power,read more.
when He comes to be glorified in His saints on that day, and to be marveled at among all who have believed—for our testimony to you was believed.

for they are spirits of demons, performing signs, which go out to the kings of the whole world, to gather them together for the war of the great day of God, the Almighty.

And I saw heaven opened, and behold, a white horse, and He who sat on it is called Faithful and True, and in righteousness He judges and wages war. His eyes are a flame of fire, and on His head are many diadems; and He has a name written on Him which no one knows except Himself. He is clothed with a robe dipped in blood, and His name is called The Word of God.read more.
And the armies which are in heaven, clothed in fine linen, white and clean, were following Him on white horses. From His mouth comes a sharp sword, so that with it He may strike down the nations, and He will rule them with a rod of iron; and He treads the wine press of the fierce wrath of God, the Almighty. And on His robe and on His thigh He has a name written, “KING OF KINGS, AND LORD OF LORDS.” Then I saw an angel standing in the sun, and he cried out with a loud voice, saying to all the birds which fly in midheaven, “Come, assemble for the great supper of God, so that you may eat the flesh of kings and the flesh of commanders and the flesh of mighty men and the flesh of horses and of those who sit on them and the flesh of all men, both free men and slaves, and small and great.” And I saw the beast and the kings of the earth and their armies assembled to make war against Him who sat on the horse and against His army. And the beast was seized, and with him the false prophet who performed the signs in his presence, by which he deceived those who had received the mark of the beast and those who worshiped his image; these two were thrown alive into the lake of fire which burns with brimstone. And the rest were killed with the sword which came from the mouth of Him who sat on the horse, and all the birds were filled with their flesh.

Four Horsemen Of The Apocalypse

I looked, and behold, an