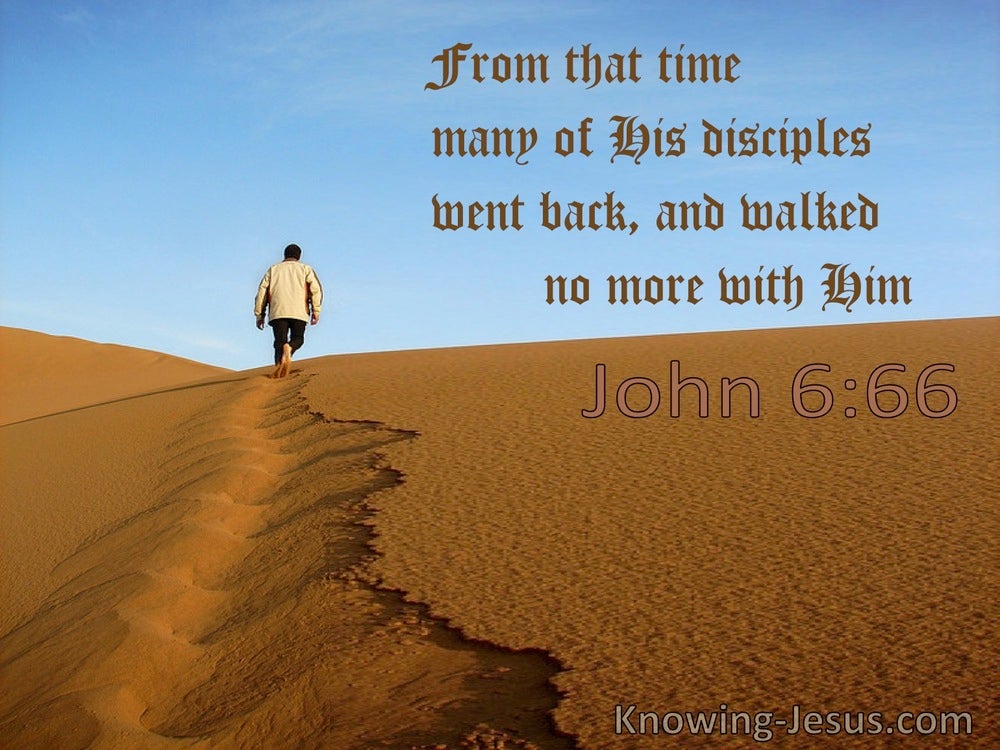 Then Judas Iscariot, who was one of the twelve, went off to the chief priests in order to betray Him to them. They were glad when they heard this, and promised to give him money. And he began seeking how to betray Him at an opportune time.

And Satan entered into Judas who was called Iscariot, belonging to the number of the twelve. And he went away and discussed with the chief priests and officers how he might betray Him to them. They were glad and agreed to give him money.read more.
So he consented, and began seeking a good opportunity to betray Him to them apart from the crowd.

Then you will begin to say, ‘We ate and drank in Your presence, and You taught in our streets’; and He will say, ‘I tell you, I do not know where you are from; depart from Me, all you evildoers.’

As a result of this many of His disciples withdrew and were not walking with Him anymore.

But a man named Ananias, with his wife Sapphira, sold a piece of property, and kept back some of the price for himself, with his wife’s full knowledge, and bringing a portion of it, he laid it at the apostles’ feet. But Peter said, “Ananias, why has Satan filled your heart to lie to the Holy Spirit and to keep back some of the price of the land?read more.
While it remained unsold, did it not remain your own? And after it was sold, was it not under your control? Why is it that you have conceived this deed in your heart? You have not lied to men but to God.” And as he heard these words, Ananias fell down and breathed his last; and great fear came over all who heard of it. The young men got up and covered him up, and after carrying him out, they buried him. Now there elapsed an interval of about three hours, and his wife came in, not knowing what had happened. And Peter responded to her, “Tell me whether you sold the land for such and such a price?” And she said, “Yes, that was the price.” Then Peter said to her, “Why is it that you have agreed together to put the Spirit of the Lord to the test? Behold, the feet of those who have buried your husband are at the door, and they will carry you out as well.” And immediately she fell at his feet and breathed her last, and the young men came in and found her dead, and they carried her out and buried her beside her husband. And great fear came over the whole church, and over all who heard of these things.

keeping faith and a good conscience, which some have rejected and suffered shipwreck in regard to their faith. Among these are Hymenaeus and Alexander, whom I have handed over to Satan, so that they will be taught not to blaspheme.

They profess to know God, but by their deeds they deny Him, being detestable and disobedient and worthless for any good deed.

for Demas, having loved this present world, has deserted me and gone to Thessalonica; Crescens has gone to Galatia, Titus to Dalmatia.

But false prophets also arose among the people, just as there will also be false teachers among you, who will secretly introduce destructive heresies, even denying the Master who bought them, bringing swift destruction upon themselves. Many will follow their sensuality, and because of them the way of the truth will be maligned; and in their greed they will exploit you with false words; their judgment from long ago is not idle, and their destruction is not asleep.

But I have this against you, that you tolerate the woman Jezebel, who calls herself a prophetess, and she teaches and leads My bond-servants astray so that they commit acts of immorality and eat things sacrificed to idols. I gave her time to repent, and she does not want to repent of her immorality. Behold, I will throw her on a bed of sickness, and those who commit adultery with her into great tribulation, unless they repent of her deeds.

and their talk will spread like gangrene. Among them are Hymenaeus and Philetus,