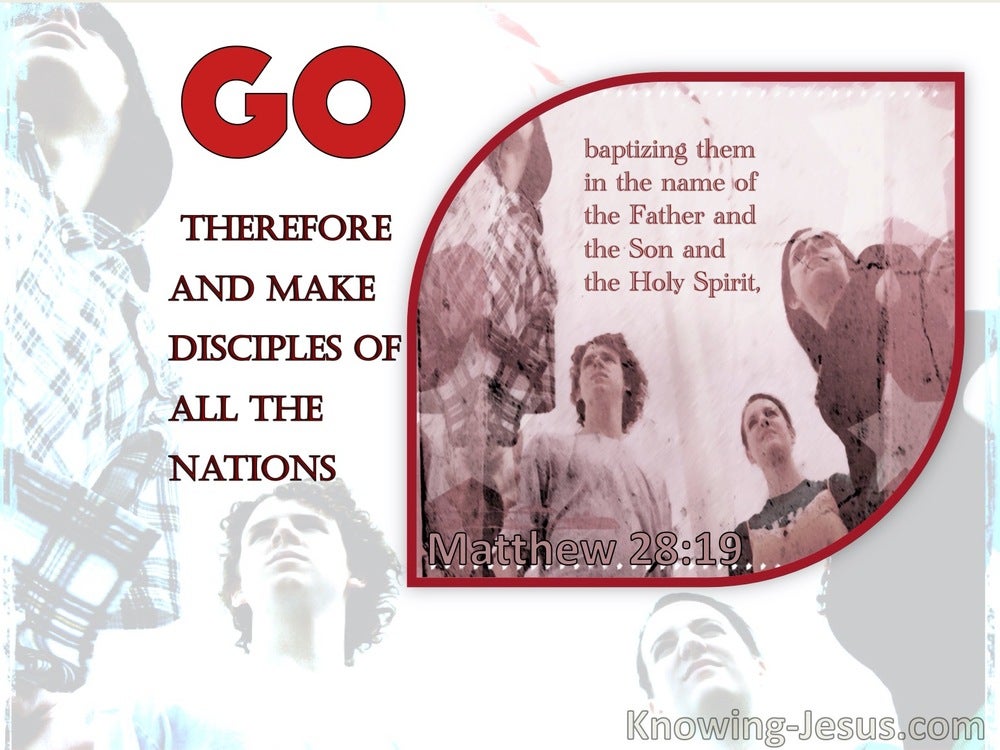 Go therefore and make disciples of all the nations, baptizing them in the name of the Father and the Son and the Holy Spirit, teaching them to observe all that I commanded you; and lo, I am with you always, even to the end of the age.”

And He appointed twelve, so that they would be with Him and that He could send them out to preach, and to have authority to cast out the demons.

And He *summoned the twelve and began to send them out in pairs, and gave them authority over the unclean spirits; and He instructed them that they should take nothing for their journey, except a mere staff—no bread, no bag, no money in their belt— but to wear sandals; and He added, “Do not put on two tunics.”read more.
And He said to them, “Wherever you enter a house, stay there until you leave town. Any place that does not receive you or listen to you, as you go out from there, shake the dust off the soles of your feet for a testimony against them.”

And He called the twelve together, and gave them power and authority over all the demons and to heal diseases. And He sent them out to proclaim the kingdom of God and to perform healing. And He said to them, “Take nothing for your journey, neither a staff, nor a bag, nor bread, nor money; and do not even have two tunics apiece.read more.
Whatever house you enter, stay there until you leave that city. And as for those who do not receive you, as you go out from that city, shake the dust off your feet as a testimony against them.”

“You are those who have stood by Me in My trials; and just as My Father has granted Me a kingdom, I grant you that you may eat and drink at My table in My kingdom, and you will sit on thrones judging the twelve tribes of Israel.

And He ordered us to preach to the people, and solemnly to testify that this is the One who has been appointed by God as Judge of the living and the dead.