16 Bible Verses about Blessings Of The Poor 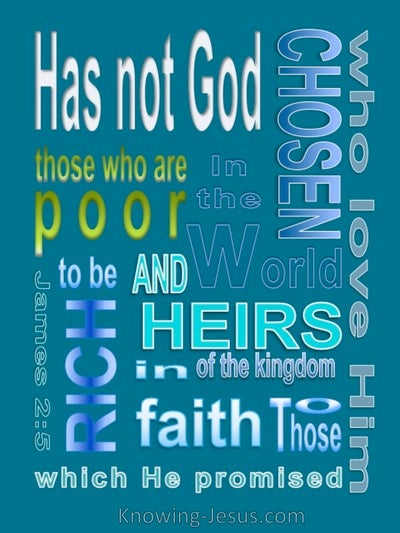 His sons do the poor oppress, And his hands give back his wealth.

for all, out of their abundance, put in, but she, out of her want, all that she had put in -- all her living.'

for all these out of their superabundance did cast into the gifts to God, but this one out of her want, all the living that she had, did cast in.'

because in much trial of tribulation the abundance of their joy, and their deep poverty, did abound to the riches of their liberality;

Hearken, my brethren beloved, did not God choose the poor of this world, rich in faith, and heirs of the reign that He promised to those loving Him?

as sorrowful, and always rejoicing; as poor, and making many rich; as having nothing, and possessing all things.

I have known thy works, and tribulation, and poverty -- yet thou art rich -- and the evil-speaking of those saying themselves to be Jews, and are not, but are a synagogue of the Adversary.

because thou sayest -- I am rich, and have grown rich, and have need of nothing, and hast not known that thou art the wretched, and miserable, and poor, and blind, and naked,

Better is the little of the righteous, Than the store of many wicked.

Better is the poor walking in his integrity, Than the perverse in his lips, who is a fool.

Better is the poor walking in his integrity, Than the perverse of ways who is rich.

And he, having lifted up his eyes to his disciples, said: 'Happy the poor -- because yours is the reign of God.

Better is a poor and wise youth than an old and foolish king, who hath not known to be warned any more.