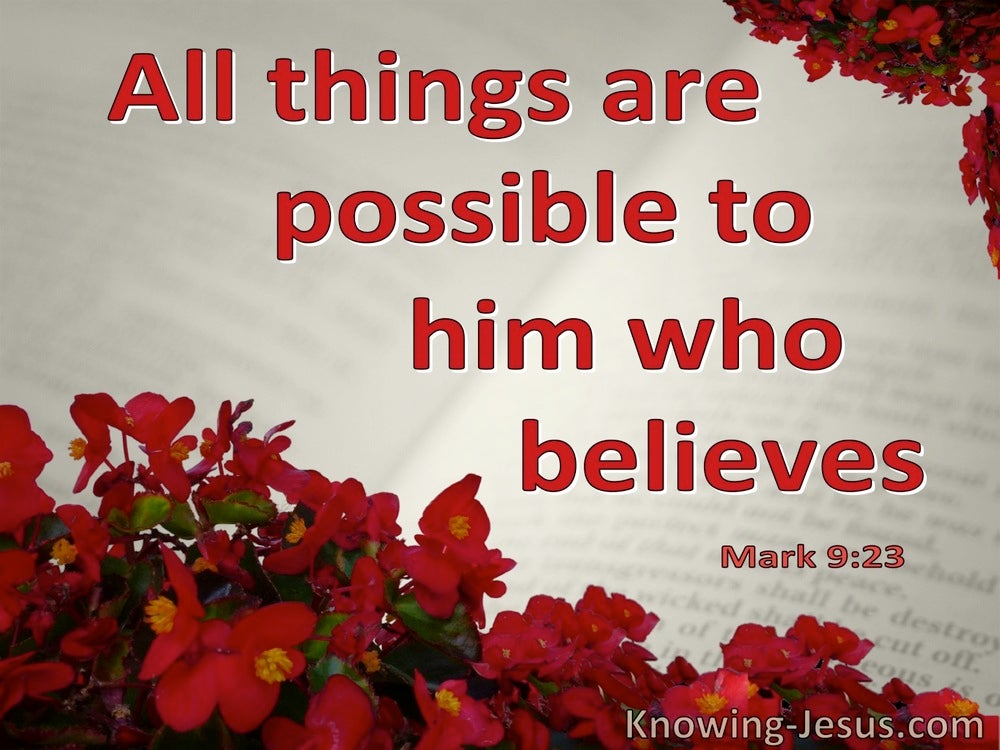 And one of the crowd answered Him, “Teacher, I brought You my son, possessed with a spirit which makes him mute; and whenever it seizes him, it slams him to the ground and he foams at the mouth, and grinds his teeth and stiffens out. I told Your disciples to cast it out, and they could not do it.” And He *answered them and *said, “O unbelieving generation, how long shall I be with you? How long shall I put up with you? Bring him to Me!”read more.
They brought the boy to Him. When he saw Him, immediately the spirit threw him into a convulsion, and falling to the ground, he began rolling around and foaming at the mouth. And He asked his father, “How long has this been happening to him?” And he said, “From childhood. It has often thrown him both into the fire and into the water to destroy him. But if You can do anything, take pity on us and help us!” And Jesus said to him, “‘If You can?’ All things are possible to him who believes.” Immediately the boy’s father cried out and said, “I do believe; help my unbelief.” When Jesus saw that a crowd was rapidly gathering, He rebuked the unclean spirit, saying to it, “You deaf and mute spirit, I command you, come out of him and do not enter him again.” After crying out and throwing him into terrible convulsions, it came out; and the boy became so much like a corpse that most of them said, “He is dead!” But Jesus took him by the hand and raised him; and he got up.

When they came to the crowd, a man came up to Jesus, falling on his knees before Him and saying, “Lord, have mercy on my son, for he is a lunatic and is very ill; for he often falls into the fire and often into the water. I brought him to Your disciples, and they could not cure him.”read more.
And Jesus answered and said, “You unbelieving and perverted generation, how long shall I be with you? How long shall I put up with you? Bring him here to Me.” And Jesus rebuked him, and the demon came out of him, and the boy was cured at once.

On the next day, when they came down from the mountain, a large crowd met Him. And a man from the crowd shouted, saying, “Teacher, I beg You to look at my son, for he is my only boy, and a spirit seizes him, and he suddenly screams, and it throws him into a convulsion with foaming at the mouth; and only with difficulty does it leave him, mauling him as it leaves.read more.
I begged Your disciples to cast it out, and they could not.” And Jesus answered and said, “You unbelieving and perverted generation, how long shall I be with you and put up with you? Bring your son here.” While he was still approaching, the demon slammed him to the ground and threw him into a convulsion. But Jesus rebuked the unclean spirit, and healed the boy and gave him back to his father.

As they were going out, a mute, demon-possessed man was brought to Him. After the demon was cast out, the mute man spoke; and the crowds were amazed, and were saying, “Nothing like this has ever been seen in Israel.”

And He was casting out a demon, and it was mute; when the demon had gone out, the mute man spoke; and the crowds were amazed.