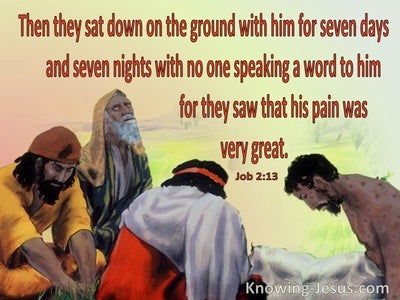 I wish that those who are troubling you would even mutilate themselves.

Alexander the coppersmith did me much harm; the Lord will repay him according to his deeds. Be on guard against him yourself, for he vigorously opposed our teaching.

All of them conspired together to come and fight against Jerusalem and to cause a disturbance in it.

Now when Job’s three friends heard of all this adversity that had come upon him, they came each one from his own place, Eliphaz the Temanite, Bildad the Shuhite and Zophar the Naamathite; and they made an appointment together to come to sympathize with him and comfort him. When they lifted up their eyes at a distance and did not recognize him, they raised their voices and wept. And each of them tore his robe and they threw dust over their heads toward the sky. Then they sat down on the ground with him for seven days and seven nights with no one speaking a word to him, for they saw that his pain was very great.

The oracle concerning the beasts of the Negev.
Through a land of distress and anguish,
From where come lioness and lion, viper and flying serpent,
They carry their riches on the backs of young donkeys
And their treasures on camels’ humps,
To a people who cannot profit them;
Even Egypt, whose help is vain and empty.
Therefore, I have called her
“Rahab who has been exterminated.”
Now go, write it on a tablet before them
And inscribe it on a scroll,
That it may serve in the time to come
As a witness forever.
read more.
For this is a rebellious people, false sons,
Sons who refuse to listen
To the instruction of the Lord;
Who say to the seers, “You must not see visions”;
And to the prophets, “You must not prophesy to us what is right,
Speak to us pleasant words,
Prophesy illusions.
“Get out of the way, turn aside from the path,
Let us hear no more about the Holy One of Israel.”

“But you made the Nazirites drink wine,
And you commanded the prophets saying, ‘You shall not prophesy!’

Then he showed me Joshua the high priest standing before the angel of the Lord, and Satan standing at his right hand to accuse him. The Lord said to Satan, “The Lord rebuke you, Satan! Indeed, the Lord who has chosen Jerusalem rebuke you! Is this not a brand plucked from the fire?”

Then they *came to Jericho. And as He was leaving Jericho with His disciples and a large crowd, a blind beggar named Bartimaeus, the son of Timaeus, was sitting by the road. When he heard that it was Jesus the Nazarene, he began to cry out and say, “Jesus, Son of David, have mercy on me!” Many were sternly telling him to be quiet, but he kept crying out all the more, “Son of David, have mercy on me!”

Now there were at Antioch, in the church that was there, prophets and teachers: Barnabas, and Simeon who was called Niger, and Lucius of Cyrene, and Manaen who had been brought up with Herod the tetrarch, and Saul. While they were ministering to the Lord and fasting, the Holy Spirit said, “Set apart for Me Barnabas and Saul for the work to which I have called them.” Then, when they had fasted and prayed and laid their hands on them, they sent them away.read more.
So, being sent out by the Holy Spirit, they went down to Seleucia and from there they sailed to Cyprus. When they reached Salamis, they began to proclaim the word of God in the synagogues of the Jews; and they also had John as their helper. When they had gone through the whole island as far as Paphos, they found a magician, a Jewish false prophet whose name was Bar-Jesus, who was with the proconsul, Sergius Paulus, a man of intelligence. This man summoned Barnabas and Saul and sought to hear the word of God. But Elymas the magician (for so his name is translated) was opposing them, seeking to turn the proconsul away from the faith. But Saul, who was also known as Paul, filled with the Holy Spirit, fixed his gaze on him, and said, “You who are full of all deceit and fraud, you son of the devil, you enemy of all righteousness, will you not cease to make crooked the straight ways of the Lord? Now, behold, the hand of the Lord is upon you, and you will be blind and not see the sun for a time.” And immediately a mist and a darkness fell upon him, and he went about seeking those who would lead him by the hand. Then the proconsul believed when he saw what had happened, being amazed at the teaching of the Lord. Now Paul and his companions put out to sea from Paphos and came to Perga in Pamphylia; but John left them and returned to Jerusalem.

Now when the enemies of Judah and Benjamin heard that the people of the exile were building a temple to the Lord God of Israel, they approached Zerubbabel and the heads of fathers’ households, and said to them, “Let us build with you, for we, like you, seek your God; and we have been sacrificing to Him since the days of Esarhaddon king of Assyria, who brought us up here.” But Zerubbabel and Jeshua and the rest of the heads of fathers’ households of Israel said to them, “You have nothing in common with us in building a house to our God; but we ourselves will together build to the Lord God of Israel, as King Cyrus, the king of Persia has commanded us.”read more.
Then the people of the land discouraged the people of Judah, and frightened them from building, and hired counselors against them to frustrate their counsel all the days of Cyrus king of Persia, even until the reign of Darius king of Persia.