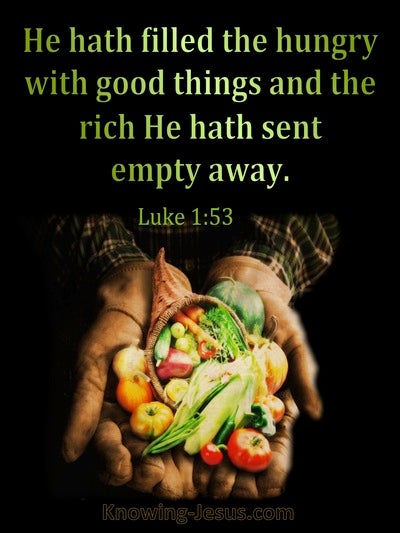 But the farmers grabbed the servant, beat him, and sent him back empty-handed.

At the right time he sent a servant to the farmers in order to get his share of the produce of the vineyard. But the farmers beat him and sent him back empty-handed.

He sent another servant, and they beat him, too, treated him shamefully, and sent him back empty-handed.

Genesis 31:42
Verse Concepts
I Am SufferingGod Requite Them!Those Who ToiledGod For Us
God Sending His SonGod Of The FathersFear Of God, Examples OfGod Seeing Their Affliction

If the God of my father the God of Abraham, the God whom Isaac feared had not been with me, you would have sent me away empty handed. But God saw my misery and how hard I've worked with my own hands and he rebuked you last night."

Then she related everything that the man had done for her. Ruth also said, "He gave me these six units of barley and told me, "Don't go back to your mother-in-law empty-handed.'"

He filled hungry people with good things and sent rich people away with nothing.

I will grant this people public favor with the Egyptians, and as a result, when you leave you won't go empty-handed.

You are to observe the Festival of Unleavened Bread. As I commanded you, you are to eat unleavened bread for seven days at the appointed time in the month Abib, because in it you came out of Egypt. No one is to appear before me empty handed.

But when you set them free, don't send them away empty-handed.