17 Bible Verses about Famine, Examples Of 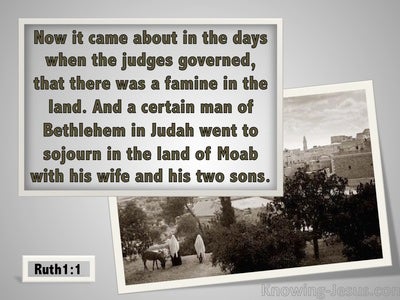 There was a famine in the land, so Abram went down to Egypt to live because the famine was so severe.

"But a famine spread throughout Egypt and Canaan, and with it great suffering, and our ancestors couldn't find any food.

Now there came a time of famine while judges were ruling in the land of Israel. A man from Bethlehem of Judah, his wife, and his two sons left to live in the country of Moab.

One time there was a famine during David's reign that went on for three straight years. David sought the LORD, who said, "Saul and his household are guilty because he executed the Gibeonites."

Quite some time later three years later! this message from the LORD came to Elijah: "Go visit Ahab, and I'll send some rain to the surface of the ground." So Elijah went to show himself to Ahab, right when the famine in Samaria was most severe. Ahab called for Obadiah, his household supervisor. This man, who feared the LORD very much, read more.
had taken 100 prophets and had hidden them by fifties in a cave, providing them with food and water when Jezebel was trying to destroy the LORD's prophets. Ahab had instructed Obadiah, "Go throughout the land to all of the water springs and to all of the valleys. Maybe we'll find some grass to keep the horses and mules alive. Also, maybe we won't have to kill some of our cattle."

I'm telling you the truth there were many widows in Israel in Elijah's time, when it didn't rain for three years and six months and there was a severe famine everywhere in the land.

until there was a great famine throughout Samaria. The siege lasted until a donkey's head cost 80 silver coins and one quarter of a unit of dove's dung cost five silver coins.

"These twin things have come upon you (who can feel sorry for you?): ruin and destruction, famine and the sword who can console you?

One of them named Agabus got up and predicted by the Spirit that there would be a severe famine all over the world. This happened during the reign of Claudius.

because nation will rise up in arms against nation, and kingdom against kingdom. There will be famines and earthquakes in various places.

Later on, a famine swept through the land. This famine was different from the previous famine that had occurred earlier, during Abraham's lifetime. So Isaac went to Abimelech, king of the Philistines, at Gerar.

"But a famine spread throughout Egypt and Canaan, and with it great suffering, and our ancestors couldn't find any food. But when Jacob heard that there was grain in Egypt, he sent our ancestors on their first trip. On their second trip, Joseph made himself known to his brothers, and Joseph introduced his family to Pharaoh.

Some time later, King Ben-hadad from Aram mustered his army, invaded the land, and attacked Samaria until there was a great famine throughout Samaria. The siege lasted until a donkey's head cost 80 silver coins and one quarter of a unit of dove's dung cost five silver coins.