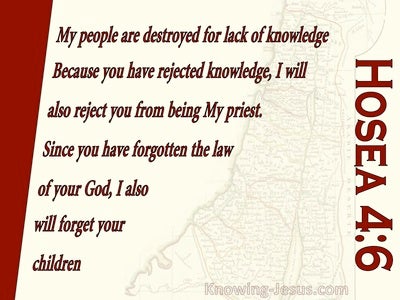 And they left the house of the LORD God of their fathers and served groves and idols, and wrath came upon Judah and Jerusalem for their guilt.

And it came to pass, when Rehoboam had confirmed the kingdom and had strengthened himself, he forsook the law of the LORD, and all Israel with him.

And they rejected his statutes and his covenant that he made with their fathers and his testimonies which he testified against them, and they followed vanity and became vain and went after the Gentiles that were round about them, concerning whom the LORD had charged them, that they should not do like them.

And they left all the commandments of the LORD their God and made themselves molten images, even two calves, and made groves and worshipped all the host of heaven and served Baal;

And now, O our God, what shall we say after this? For we have forsaken thy commandments,

And he answered, I have not troubled Israel; but thou and thy father's house, in that ye have forsaken the commandments of the LORD, and thou hast followed Baalim.

For laying aside the commandment of God, ye hold the tradition of men as the washing of pots and cups, and many other such like things ye do.

And the LORD said, Because they have forsaken my law, which I set before them, and have not heard my voice, neither walked therein,

Horror has taken hold upon me because of the wicked that forsake thy law.

But if ye turn away and forsake my statutes and my commandments, which I have set before you, and shall go and serve other gods and worship them,

The wise men are ashamed, they are dismayed and taken: behold, they have rejected the word of the LORD; and what wisdom is in them?

Nevertheless I have against thee that thou hast left thy first love, charity.

Israel has cast off the good; the enemy shall pursue him.

My people were cut off because they lacked wisdom; because thou hast rejected wisdom, I will cast thee out of the priesthood; seeing thou hast forgotten the law of thy God, I will also forget thy sons.

And he replied, I have been very jealous for the LORD God of the hosts, for the sons of Israel have forsaken thy covenant, thrown down thine altars, and slain thy prophets with the sword; and I, even I only, am left, and they seek me to take my life.

And he replied, I have been very jealous for the LORD God of the hosts because the sons of Israel have forsaken thy covenant, thrown down thine altars, and slain thy prophets with the sword; and I, even I only, am left, and they seek me to take my life.

Then I contended with the rulers and said, Why is the house of God forsaken? And I gathered them together and set them in their place.