12 Bible Verses about From Birth 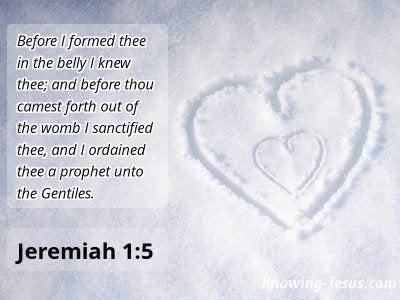 Psalm 22:10
Verse Concepts
You Are Our GodBaby dedication
From The WombScoffers

I was cast upon thee from the womb; thou art my God from my mother's belly.

By thee have I been sustained from the womb; thou art he that took me out of my mother's bowels; my praise has been continually of thee.

Isaiah 46:3
Verse Concepts
Pay Attention To God!
From The Womb

Hearken unto me, O house of Jacob, and all the remnant of the house of Israel, which are borne by me from the belly, which are carried from the womb:

Before I formed thee in the belly I knew thee; and before thou camest forth out of the womb I sanctified thee, and I ordained thee a prophet unto the Gentiles.

The wicked are estranged from the womb; they go astray as soon as they are born, speaking lies.

And as Jesus passed by, he saw a man who was blind from his birth.

John 9:19
Verse Concepts
Is It Really?

And they asked them, saying, Is this your son, who ye say was born blind? how then does he now see?

His parents answered them and said, We know that this is our son and that he was born blind;

Since the world began it has not been heard of that anyone opened the eyes of one that was born blind.

Topics on From Birth

Behold, the pain of my iniquity has caused me to writhe; my mother conceived me so that sin might be removed from me.