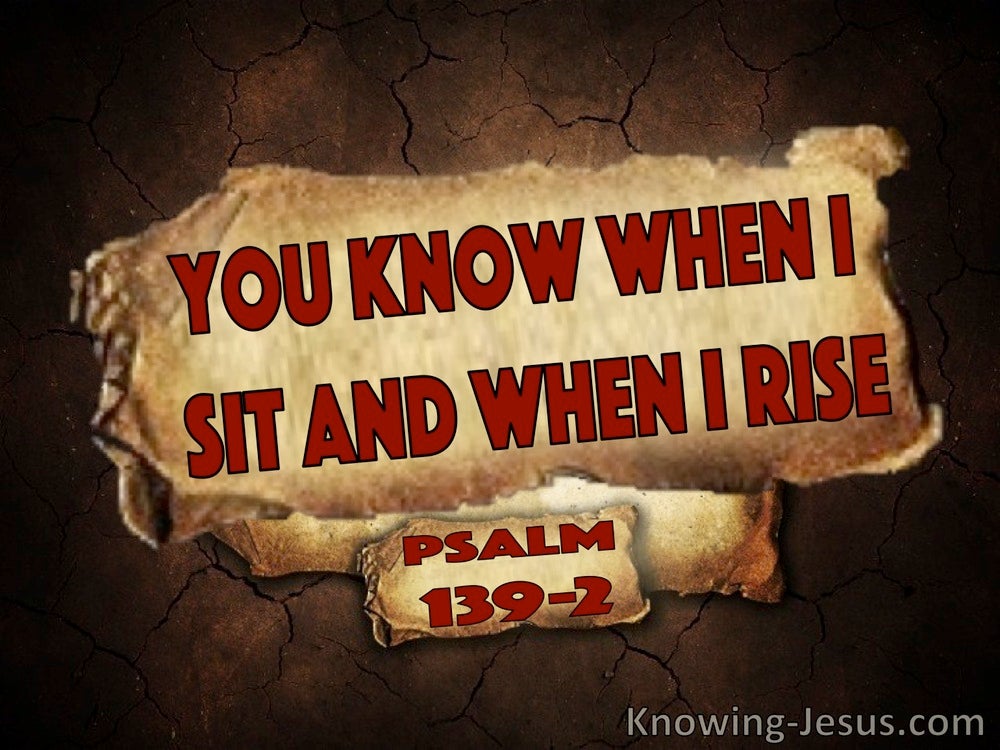 “For His eyes are upon the ways of a man,
And He sees all his steps.

“He provides them with security, and they are supported;
And His eyes are on their ways.

Job 31:4
Verse Concepts
God Seeing All PeopleEyes Of The Lord
God, All knowingSteps Of The Saints

“Does He not see my ways
And number all my steps?

The Lord looks from heaven;
He sees all the sons of men;
From His dwelling place He looks out
On all the inhabitants of the earth,
He who fashions the hearts of them all,
He who understands all their works.

You know when I sit down and when I rise up;
You understand my thought from afar.
You scrutinize my path and my lying down,
And are intimately acquainted with all my ways.

So do not be like them; for your Father knows what you need before you ask Him.

“As for you, my son Solomon, know the God of your father, and serve Him with a whole heart and a willing mind; for the Lord searches all hearts, and understands every intent of the thoughts. If you seek Him, He will let you find Him; but if you forsake Him, He will reject you forever.

If we had forgotten the name of our God
Or extended our hands to a strange god,
Would not God find this out?
For He knows the secrets of the heart.

For the choir director. A Psalm of David.
O Lord, You have searched me and known me.
You know when I sit down and when I rise up;
You understand my thought from afar.

“I, the Lord, search the heart,
I test the mind,
Even to give to each man according to his ways,
According to the results of his deeds.

Ezekiel 11:5
Verse Concepts
Man's ThoughtsThoughts Of The WickedGod, All knowing
God Knowing the Human HeartExposure Of SinThe Spirit Of The Lord

Then the Spirit of the Lord fell upon me, and He said to me, “Say, ‘Thus says the Lord, “So you think, house of Israel, for I know your thoughts.

For the word of God is living and active and sharper than any two-edged sword, and piercing as far as the division of soul and spirit, of both joints and marrow, and able to judge the thoughts and intentions of the heart. And there is no creature hidden from His sight, but all things are open and laid bare to the eyes of Him with whom we have to do.

Now Abraham journeyed from there toward the land of the Negev, and settled between Kadesh and Shur; then he sojourned in Gerar. Abraham said of Sarah his wife, “She is my sister.” So Abimelech king of Gerar sent and took Sarah. But God came to Abimelech in a dream of the night, and said to him, “Behold, you are a dead man because of the woman whom you have taken, for she is married.”read more.
Now Abimelech had not come near her; and he said, “Lord, will You slay a nation, even though blameless? Did he not himself say to me, ‘She is my sister’? And she herself said, ‘He is my brother.’ In the integrity of my heart and the innocence of my hands I have done this.” Then God said to him in the dream, “Yes, I know that in the integrity of your heart you have done this, and I also kept you from sinning against Me; therefore I did not let you touch her. Now therefore, restore the man’s wife, for he is a prophet, and he will pray for you and you will live. But if you do not restore her, know that you shall surely die, you and all who are yours.”

Now the Lord said to Samuel, “How long will you grieve over Saul, since I have rejected him from being king over Israel? Fill your horn with oil and go; I will send you to Jesse the Bethlehemite, for I have selected a king for Myself among his sons.” But Samuel said, “How can I go? When Saul hears of it, he will kill me.” And the Lord said, “Take a heifer with you and say, ‘I have come to sacrifice to the Lord.’ You shall invite Jesse to the sacrifice, and I will show you what you shall do; and you shall anoint for Me the one whom I designate to you.”read more.
So Samuel did what the Lord said, and came to Bethlehem. And the elders of the city came trembling to meet him and said, “Do you come in peace?” He said, “In peace; I have come to sacrifice to the Lord. Consecrate yourselves and come with me to the sacrifice.” He also consecrated Jesse and his sons and invited them to the sacrifice. When they entered, he looked at Eliab and thought, “Surely the Lord’s anointed is before Him.” But the Lord said to Samuel, “Do not look at his appearance or at the height of his stature, because I have rejected him; for God sees not as man sees, for man looks at the outward appearance, but the Lord looks at the heart.” Then Jesse called Abinadab and made him pass before Samuel. And he said, “The Lord has not chosen this one either.” Next Jesse made Shammah pass by. And he said, “The Lord has not chosen this one either.” Thus Jesse made seven of his sons pass before Samuel. But Samuel said to Jesse, “The Lord has not chosen these.” And Samuel said to Jesse, “Are these all the children?” And he said, “There remains yet the youngest, and behold, he is tending the sheep.” Then Samuel said to Jesse, “Send and bring him; for we will not sit down until he comes here.” So he sent and brought him in. Now he was ruddy, with beautiful eyes and a handsome appearance. And the Lord said, “Arise, anoint him; for this is he.”

But a man named Ananias, with his wife Sapphira, sold a piece of property, and kept back some of the price for himself, with his wife’s full knowledge, and bringing a portion of it, he laid it at the apostles’ feet. But Peter said, “Ananias, why has Satan filled your heart to lie to the Holy Spirit and to keep back some of the price of the land?read more.
While it remained unsold, did it not remain your own? And after it was sold, was it not under your control? Why is it that you have conceived this deed in your heart? You have not lied to men but to God.” And as he heard these words, Ananias fell down and breathed his last; and great fear came over all who heard of it. The young men got up and covered him up, and after carrying him out, they buried him. Now there elapsed an interval of about three hours, and his wife came in, not knowing what had happened. And Peter responded to her, “Tell me whether you sold the land for such and such a price?” And she said, “Yes, that was the price.” Then Peter said to her, “Why is it that you have agreed together to put the Spirit of the Lord to the test? Behold, the feet of those who have buried your husband are at the door, and they will carry you out as well.” And immediately she fell at his feet and breathed her last, and the young men came in and found her dead, and they carried her out and buried her beside her husband.

For My eyes are on all their ways; they are not hidden from My face, nor is their iniquity concealed from My eyes.

If I sin, then You would take note of me,
And would not acquit me of my guilt.

O God, it is You who knows my folly,
And my wrongs are not hidden from You.

“Although you wash yourself with lye
And use much soap,
The stain of your iniquity is before Me,” declares the Lord God.

And they do not consider in their hearts
That I remember all their wickedness.
Now their deeds are all around them;
They are before My face.