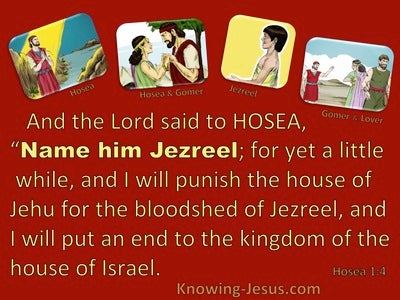 He said to me, "The sin of the house of Israel and Judah is extremely great; the land is full of murder, and the city is full of corruption, for they say, 'The Lord has abandoned the land, and the Lord does not see!'

When you spread out your hands in prayer, I look the other way; when you offer your many prayers, I do not listen, because your hands are covered with blood.

For your hands are stained with blood and your fingers with sin; your lips speak lies, your tongue utters malicious words.

Gilead is a city full of evildoers; its streets are stained with bloody footprints!

"'See how each of the princes of Israel living within you has used his authority to shed blood.

He and his people with him, the most terrifying of the nations, will be brought there to destroy the land. They will draw their swords against Egypt, and fill the land with corpses.

"'See, I strike my hands together at the dishonest profit you have made, and at the bloodshed they have done among you.

Then say, 'This is what the sovereign Lord says: O city, who spills blood within herself (which brings on her doom), and who makes herself idols (which results in impurity),

At that time the sovereign master will wash the excrement from Zion's women, he will rinse the bloodstains from Jerusalem's midst, as he comes to judge and to bring devastation.

The one who builds a city by bloodshed is as good as dead -- he who starts a town by unjust deeds.

But reports will trouble him from the east and north, and he will set out in a tremendous rage to destroy and wipe out many.

Then the Lord said to Hosea, "Name him 'Jezreel,' because in a little while I will punish the dynasty of Jehu on account of the bloodshed in the valley of Jezreel, and I will put an end to the kingdom of Israel.

From the blood of the slain, from the fat of warriors, the bow of Jonathan was not turned away. The sword of Saul never returned empty.

The servants of Achish said to him, "Isn't this David, the king of the land? Isn't he the one that they sing about when they dance, saying, 'Saul struck down his thousands, But David his tens of thousands'?"

Isn't this David, of whom they sang as they danced, 'Saul has struck down his thousands, but David his tens of thousands'?"

These are the names of David's warriors: Josheb-Basshebeth, a Tahkemonite, was head of the officers. He killed eight hundred men with his spear in one battle.

Abishai son of Zeruiah, the brother of Joab, was head of the three. He killed three hundred men with his spear and gained fame among the three.

You have killed many people in this city; you have filled its streets with corpses.'