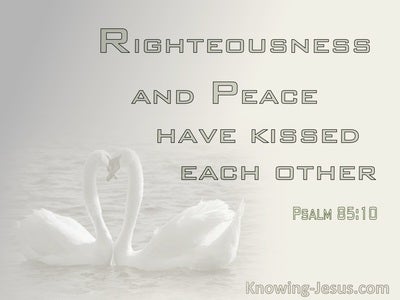 Salute one another with a holy kiss. All the congregations of Christ salute you.

But Jesus said unto him, Judas, betrayest thou the Son of man with a kiss?

Faithful are the wounds of a friend, but the kisses of an enemy are deceitful.

And his father Isaac said unto him, Come near now and kiss me, my son. And he came near and kissed him, and he smelled the smell of his clothing and blessed him and said, See, the smell of my son is as the smell of a field which the LORD has blessed.

And Jacob kissed Rachel and lifted up his voice and wept.

And Esau ran to meet him and embraced him and fell on his neck and kissed him, and they wept.

And he fell upon his brother Benjamin's neck and wept, and Benjamin wept upon his neck. Moreover he kissed all his brethren and wept upon them, and after that his brethren talked with him.

Now the eyes of Israel were so dim for age that he could not see. And he brought them near unto him, and he kissed them and embraced them.

And the LORD said to Aaron, Go into the wilderness to meet Moses. And he went and met him in the mount of God and kissed him.

And Moses went out to meet his father-in-law and did obeisance and kissed him; and they asked each other of their peace; and they came into the tent.

The LORD grant you that ye may find rest, each of you in the house of her husband. Then she kissed them, and they lifted up their voice and wept.

Then Samuel took a vial of oil and poured it upon his head and kissed him and said, Is it not because the LORD has anointed thee to be captain over his inheritance?

And as soon as the lad was gone, David arose out of a place toward the Negev and fell on his face to the ground and bowed himself three times, and they kissed one another and wept one with another, although David exceeded.

And it was so, that when anyone came near unto him to do him obeisance, he put forth his hand and took him and kissed him.

And Joab said to Amasa, Art thou in peace, my brother? And Joab took Amasa by the beard with the right hand to kiss him.

Kiss the Son lest he be angry, and ye perish from the way when his wrath is kindled in a little while. Blessed are all those that put their trust in him.

Mercy and truth are met together; righteousness and peace have kissed each other.

Thou gavest me no kiss; but this woman since the time I came in has not ceased to kiss my feet.

And he arose and came to his father. But when he was yet a great way off, his father saw him and was moved with compassion and ran and fell on his neck and kissed him.

And forthwith he came to Jesus and said, Receive joy, master; and kissed him.

Then they all wept sore and fell on Paul's neck and kissed him,

Oh! if he would kiss me with the kisses of his mouth! for thy love is better than wine.