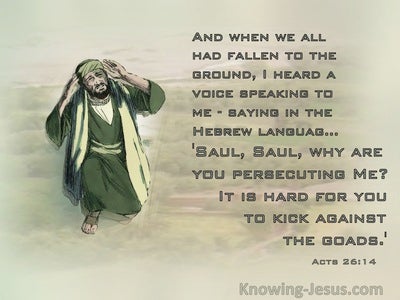 Then Rabshakeh stood and cried with a loud voice in the Jews' language and spoke, saying, Hear the word of the great king, the king of Assyria.

And when we were all fallen to the earth, I heard a voice speaking unto me and saying in the Hebrew tongue, Saul, Saul, why dost thou persecute me? It is hard for thee to kick against the pricks.

Then said Eliakim, the son of Hilkiah, and Shebna and Joah unto Rabshakeh, Speak, I pray thee, to thy slaves in the Syrian language, for we understand it, and do not talk with us in the Jews' language in the ears of the people that are on the wall.

And as Paul was to be led into the fortress, he said unto the tribunal, May I speak unto thee? Who said, Canst thou speak Greek?

And when the people saw what Paul had done, they lifted up their voices, saying in the speech of Lycaonia, The gods are come down to us in the likeness of men.

Cretes and Arabians, we hear them speak in our tongues the wonderful works of God.

This he ordained in Joseph for a testimony, when he went out through the land of Egypt where I heard a language that I did not understand.

When Israel went out of Egypt, the house of Jacob from a people of strange language,

Phrygia and Pamphylia, in Egypt and in the parts of Libya about Cyrene, and strangers of Rome, Jews and proselytes,