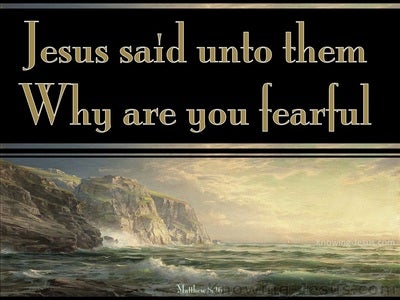 He divides the sea with his power, and by his intelligence he smites its pride.

Thou dost rule the raging of the sea: when its waves arise, thou dost still them.

He makes the storm a calm, so that its waves are still.

And he said unto them, Why are ye fearful, O ye of little faith? Then, awake, he rebuked the winds and the sea; and there was a great calm.

And as he arose, he rebuked the wind and said unto the sea, Peace, be still. And the wind ceased, and there was a great calm.

And they came to him and awoke him, saying, Master, master, we perish. Then he arose and rebuked the wind and the raging of the water, and they ceased, and there was a calm.

Then they said unto him, What shall we do unto thee that the sea may be calm unto us? for the sea rose higher and was wroth.

And he said unto them, Take me up, and cast me forth into the sea; so shall the sea be calm unto you; for I know that for my sake this great tempest is upon you.

So they took up Jonah and cast him forth into the sea; and the sea ceased from her raging.

Rather I have quieted myself and caused my soul to become silent, that I might be as a child that is weaned of his mother, as one who is weaned from my own life.