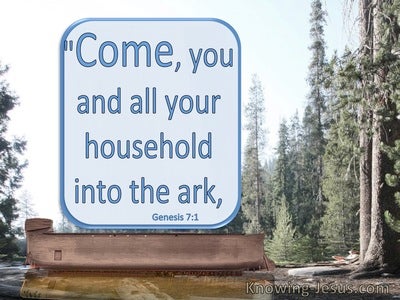 Make for yourself an ark of gopher wood; you shall make the ark with rooms, and shall cover it inside and out with pitch.

By faith Noah, being warned by God about things not yet seen, in reverence prepared an ark for the salvation of his household, by which he condemned the world, and became an heir of the righteousness which is according to faith.

Then the Lord said to Noah, “Enter the ark, you and all your household, for you alone I have seen to be righteous before Me in this time.

In the seventh month, on the seventeenth day of the month, the ark rested upon the mountains of Ararat.

For as in those days before the flood they were eating and drinking, marrying and giving in marriage, until the day that Noah entered the ark, and they did not understand until the flood came and took them all away; so will the coming of the Son of Man be.

who once were disobedient, when the patience of God kept waiting in the days of Noah, during the construction of the ark, in which a few, that is, eight persons, were brought safely through the water. Corresponding to that, baptism now saves you—not the removal of dirt from the flesh, but an appeal to God for a good conscience—through the resurrection of Jesus Christ,

Now it came about, when men began to multiply on the face of the land, and daughters were born to them, that the sons of God saw that the daughters of men were beautiful; and they took wives for themselves, whomever they chose. Then the Lord said, “My Spirit shall not strive with man forever, because he also is flesh; nevertheless his days shall be one hundred and twenty years.”read more.
The Nephilim were on the earth in those days, and also afterward, when the sons of God came in to the daughters of men, and they bore children to them. Those were the mighty men who were of old, men of renown. Then the Lord saw that the wickedness of man was great on the earth, and that every intent of the thoughts of his heart was only evil continually. The Lord was sorry that He had made man on the earth, and He was grieved in His heart. The Lord said, “I will blot out man whom I have created from the face of the land, from man to animals to creeping things and to birds of the sky; for I am sorry that I have made them.” But Noah found favor in the eyes of the Lord. These are the records of the generations of Noah. Noah was a righteous man, blameless in his time; Noah walked with God. Noah became the father of three sons: Shem, Ham, and Japheth. Now the earth was corrupt in the sight of God, and the earth was filled with violence. God looked on the earth, and behold, it was corrupt; for all flesh had corrupted their way upon the earth. Then God said to Noah, “The end of all flesh has come before Me; for the earth is filled with violence because of them; and behold, I am about to destroy them with the earth.

This is how you shall make it: the length of the ark three hundred cubits, its breadth fifty cubits, and its height thirty cubits. You shall make a window for the ark, and finish it to a cubit from the top; and set the door of the ark in the side of it; you shall make it with lower, second, and third decks.

And of every living thing of all flesh, you shall bring two of every kind into the ark, to keep them alive with you; they shall be male and female.

Noah did according to all that the Lord had commanded him.

So they went into the ark to Noah, by twos of all flesh in which was the breath of life. Those that entered, male and female of all flesh, entered as God had commanded him; and the Lord closed it behind him.

Then the flood came upon the earth for forty days, and the water increased and lifted up the ark, so that it rose above the earth.

But God remembered Noah and all the beasts and all the cattle that were with him in the ark; and God caused a wind to pass over the earth, and the water subsided. Also the fountains of the deep and the floodgates of the sky were closed, and the rain from the sky was restrained; and the water receded steadily from the earth, and at the end of one hundred and fifty days the water decreased.read more.
In the seventh month, on the seventeenth day of the month, the ark rested upon the mountains of Ararat. The water decreased steadily until the tenth month; in the tenth month, on the first day of the month, the tops of the mountains became visible. Then it came about at the end of forty days, that Noah opened the window of the ark which he had made; and he sent out a raven, and it flew here and there until the water was dried up from the earth. Then he sent out a dove from him, to see if the water was abated from the face of the land; but the dove found no resting place for the sole of her foot, so she returned to him into the ark, for the water was on the surface of all the earth. Then he put out his hand and took her, and brought her into the ark to himself. So he waited yet another seven days; and again he sent out the dove from the ark. The dove came to him toward evening, and behold, in her beak was a freshly picked olive leaf. So Noah knew that the water was abated from the earth. Then he waited yet another seven days, and sent out the dove; but she did not return to him again. Now it came about in the six hundred and first year, in the first month, on the first of the month, the water was dried up from the earth. Then Noah removed the covering of the ark, and looked, and behold, the surface of the ground was dried up. In the second month, on the twenty-seventh day of the month, the earth was dry. Then God spoke to Noah, saying, “Go out of the ark, you and your wife and your sons and your sons’ wives with you. Bring out with you every living thing of all flesh that is with you, birds and animals and every creeping thing that creeps on the earth, that they may breed abundantly on the earth, and be fruitful and multiply on the earth.” So Noah went out, and his sons and his wife and his sons’ wives with him. Every beast, every creeping thing, and every bird, everything that moves on the earth, went out by their families from the ark.