17 Bible Verses about Priests In Action 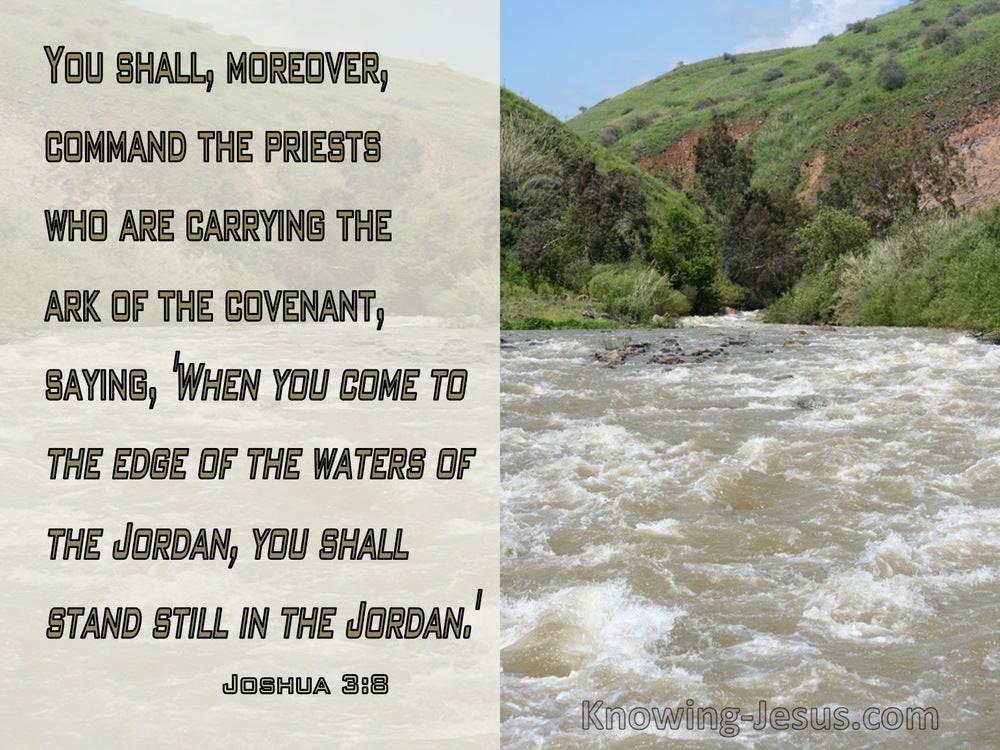 Moses sent them, a thousand from each tribe, to the war, and Phinehas the son of Eleazar the priest, to the war with them, and the holy vessels and the trumpets for the alarm in his hand.

and they commanded the people, saying, “When you see the ark of the covenant of the Lord your God with the Levitical priests carrying it, then you shall set out from your place and go after it.

Joshua 3:8
Verse Concepts
In The JordanpriestsComing To RestWalking Through Water
Priests, Function In Ot TimesStandingMotionlessness

You shall, moreover, command the priests who are carrying the ark of the covenant, saying, ‘When you come to the edge of the waters of the Jordan, you shall stand still in the Jordan.’”

So when the people set out from their tents to cross the Jordan with the priests carrying the ark of the covenant before the people,

And the priests who carried the ark of the covenant of the Lord stood firm on dry ground in the middle of the Jordan while all Israel crossed on dry ground, until all the nation had finished crossing the Jordan.

“Command the priests who carry the ark of the testimony that they come up from the Jordan.”

It came about when the priests who carried the ark of the covenant of the Lord had come up from the middle of the Jordan, and the soles of the priests’ feet were lifted up to the dry ground, that the waters of the Jordan returned to their place, and went over all its banks as before.

Joshua 8:33
Verse Concepts
Ark Of The Covenant, EventsJudges
Fractions, One HalfHalf Of Groups

All Israel with their elders and officers and their judges were standing on both sides of the ark before the Levitical priests who carried the ark of the covenant of the Lord, the stranger as well as the native. Half of them stood in front of Mount Gerizim and half of them in front of Mount Ebal, just as Moses the servant of the Lord had given command at first to bless the people of Israel.

Now behold, Zadok also came, and all the Levites with him carrying the ark of the covenant of God. And they set down the ark of God, and Abiathar came up until all the people had finished passing from the city.

Now these are the priests and the Levites who came up with Zerubbabel the son of Shealtiel, and Jeshua: Seraiah, Jeremiah, Ezra, Amariah, Malluch, Hattush, Shecaniah, Rehum, Meremoth,read more.
Iddo, Ginnethoi, Abijah, Mijamin, Maadiah, Bilgah, Shemaiah and Joiarib, Jedaiah, Sallu, Amok, Hilkiah and Jedaiah. These were the heads of the priests and their kinsmen in the days of Jeshua. The Levites were Jeshua, Binnui, Kadmiel, Sherebiah, Judah, and Mattaniah who was in charge of the songs of thanksgiving, he and his brothers.

1 Kings 8:3
Verse Concepts
The Elders Gathered
The Ark In The Temple

Then all the elders of Israel came, and the priests took up the ark.

They brought up the ark of the Lord and the tent of meeting and all the holy utensils, which were in the tent, and the priests and the Levites brought them up.

Now it happened that while he was performing his priestly service before God in the appointed order of his division,

John 1:19
Verse Concepts
Who Is John The Baptist?Priests, Tasks In Nt Times
Priests, Types Of In Nt TimesContemporary Witness To Christ

This is the testimony of John, when the Jews sent to him priests and Levites from Jerusalem to ask him, “Who are you?”

As they were speaking to the people, the priests and the captain of the temple guard and the Sadducees came up to them,