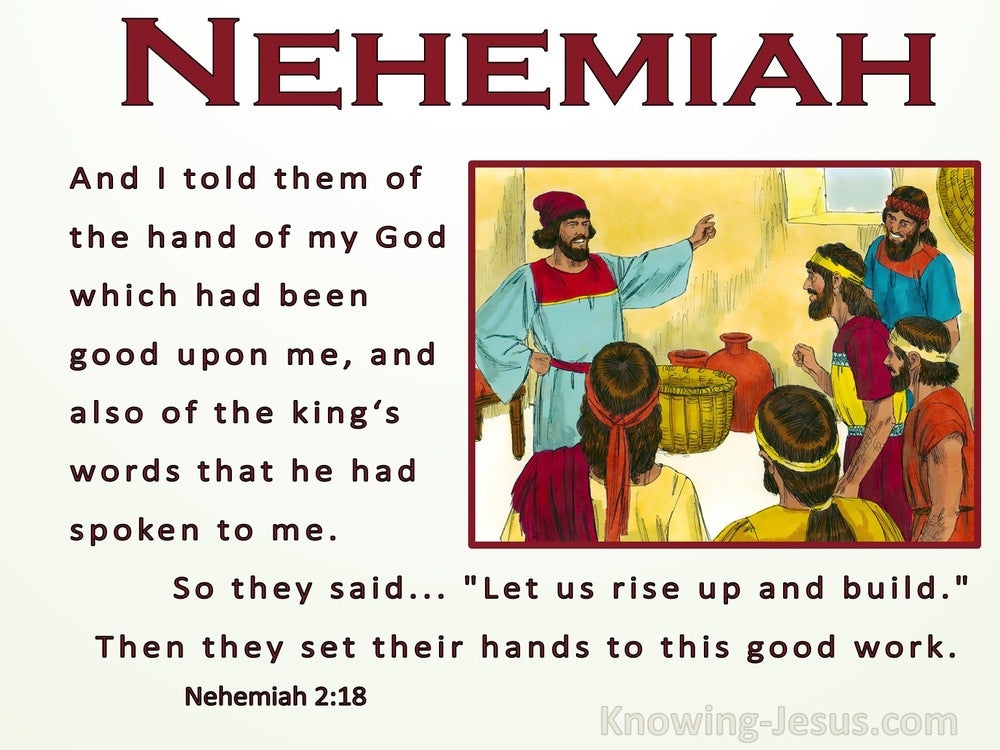 So David lived in the stronghold and called it the city of David. And David built all around from the Millo and inward.

let it be known to the king that the Jews who came up from you have come to us at Jerusalem; they are rebuilding the rebellious and evil city and are finishing the walls and repairing the foundations.

Then I said to them, “You see the bad situation we are in, that Jerusalem is desolate and its gates burned by fire. Come, let us rebuild the wall of Jerusalem so that we will no longer be a reproach.”

I told them how the hand of my God had been favorable to me and also about the king’s words which he had spoken to me. Then they said, “Let us arise and build.” So they put their hands to the good work.

The Lord builds up Jerusalem;
He gathers the outcasts of Israel.

For the Lord has built up Zion;
He has appeared in His glory.

“It is I who says of Cyrus, ‘He is My shepherd!
And he will perform all My desire.’
And he declares of Jerusalem, ‘She will be built,’
And of the temple, ‘Your foundation will be laid.’”

“Thus says the Lord,
‘Behold, I will restore the fortunes of the tents of Jacob
And have compassion on his dwelling places;
And the city will be rebuilt on its ruin,
And the palace will stand on its rightful place.

“Again I will build you and you will be rebuilt,
O virgin of Israel!
Again you will take up your tambourines,
And go forth to the dances of the merrymakers.

“Behold, days are coming,” declares the Lord, “when the city will be rebuilt for the Lord from the Tower of Hananel to the Corner Gate.

Confirming the word of His servant
And performing the purpose of His messengers.
It is I who says of Jerusalem, ‘She shall be inhabited!’
And of the cities of Judah, ‘They shall be built.’
And I will raise up her ruins again.

I will multiply men on you, all the house of Israel, all of it; and the cities will be inhabited and the waste places will be rebuilt.

Nehemiah 2:5
Verse Concepts
The Will Of MenFavorrebuilding
TravelLove, And The World

I said to the king, “If it please the king, and if your servant has found favor before you, send me to Judah, to the city of my fathers’ tombs, that I may rebuild it.”

So you are to know and discern that from the issuing of a decree to restore and rebuild Jerusalem until Messiah the Prince there will be seven weeks and sixty-two weeks; it will be built again, with plaza and moat, even in times of distress.

Now this is the account of the forced labor which King Solomon levied to build the house of the Lord, his own house, the Millo, the wall of Jerusalem, Hazor, Megiddo, and Gezer.

As soon as Pharaoh’s daughter came up from the city of David to her house which Solomon had built for her, then he built the Millo.

Now this was the reason why he rebelled against the king: Solomon built the Millo, and closed up the breach of the city of his father David.

Who build Zion with bloodshed
And Jerusalem with violent injustice.